WalkingDeadBr: How did you enter the show? Did you participate of any audition or were you invited to join the cast?

James Allen McCune: I did! It’s actually a pretty interesting story. I had always intended on getting on TWD, and there’s a huge amount of people I know who did extra work on the show as zombies, but I always declined offers to be a zombie because I wanted a part more substantial. (Not that being a Zombie isn’t important, they’re the reason I have a job after all) I had been meaning to ask my agent about it, and it just so happens that the one time I remember to hit him up, they were having an audition for a character named Jimmy the very next day. Usually you have to be picked to audition for parts, which I wasn’t, but my agent thought it wouldn’t hurt to slip my tape in. I really lucked out, I never had a call back or met any of the casting directors. We just submitted a tape of me reading and supposedly Frank Darabont picked me. I just hate more than anything that I never had a chance to thank him face to face.

WDBr: Tell us a little about your character, Jimmy. What can we wait of him in this new season of The Walking dead?

JAM: Well as the posters can tell you, Rick and his group show up on a farm this season. It’s in the middle of nowhere and the man who owns the place is named Hershel Greene. He has three daughters, Patricia (Played by Jane McNeal,) Maggie (Played by Lauren Cohan,) and the youngest is Beth (Played by Emily Kinney.) Jimmy is Beth’s boyfriend, and he has been taken in by the Greene family. The farm is pretty shaken by these people just showing up on their doorstep, but I guess you could say that Jimmy kind of sees it as an opportunity to make new friends. The chance to meet new people and fit in somewhere kind of left in the apocalypse, so these new people are almost a way out of the stagnant world he’s been forced to live in. 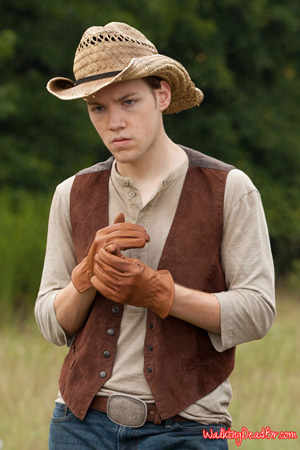 WDBr: Your character were especially created for the show, he doesn?t exist at the HQs. Do you think that helped or interfered on your acting? Was it necessary to read the HQ by Robert Kirkman? Did you know the story before the show?

JAM: No I wasn’t originally in the source material but there’s similar characters in there I could draw from. Hershel has a son in the comics, who looks a hell of a lot like me. So I kind of took the hint there. I don’t draw my character from Billy, but I did take it into consideration.

A lot of the actors in the show have read very little of the comics. I think it’s mainly because they don’t want to anticipate something that isn’t going to actually show up in our version. We try really hard to make sure the show and the comics are separately entertaining. If you read the comics and then saw a show with exactly the same material, would you really want to keep watching after a while? Not knowing what’s going to happen next is one of the main things that made the comics so amazing, and if we take away that sense of surprise, we lose a lot of the appeal. I read as much as I could of the comics mainly to get an idea of what kind of a world Jimmy has been living in. It gave me the perfect attitude going into the show, and without Jimmy actually being in the comics It was easy not to get distracted with “what am I going to be doing?”

WDBr: The Walking Dead is a zombie show, but it focus on the character’s life too, which creates a big differential to another shows about this theme. Do you have any kinship with the theme? Are you fan of any story of this genre?

JAM: I’m a huge dork at heart, and first and foremost I’m a fan of this show. I watched it every week when if first aired last year. I was obsessed! Supernatural stories have always really caught my eye. just to give you an Idea, aside from TWD, my favorite shows over the years are Doctor Who, Torchwood, Flashforward, Lost, the weirder, and more ridiculous, the more likely I am to obsess over it. The best part about this show however, is that the Zombie’s are just a vehicle for the legitimate anguish, and pain, and love and loneliness that is done so beautifully by our amazing cast and crew. What’s important about this story is the humanity of it all, and I don’t think anyone could argue how well it’s portrayed in both the comics and the show.

WDBr: We checked at IMDb that you participated on the movie “Congratulations!”. How was that experience? Could you tell us what is the movie all about and a little about your character?

JAM: That movie was a riot! It’s a Mike Brune film we shot here in Georgia. I actually got the part in the same week I got The Walking Dead, so for a while I was going from this horrifyingly sad and frightening story, to this hilariously weird dark comedy on a regular basis. It’s about a woman who loses her son at her other sons graduation party. He just goes missing out of no where and she hires a team of crackpot investigators to search for him. It stars a huge idol of mine, Rhoda Griffis, who is actually one of the reasons I got into the industry. It was a lot of fun.

I play Edward, who just graduated and is leaving for college soon. He couldn’t care about anything going on. His Mom is nuts, his brothers are annoying, and the investigators are just there to frustrate him. He really embodies apathy.

WDBr: Name 5 things that you would like to do in your artistic career that are far from been reached.

JAM: Oh wow. I have a lot I wanna do. Well In no particular order,

I started out in musical theatre, and I’ve always said that before I die I’m going to play Fiyero in “Wicked.” It’s one of my dream roles. Actually most of my dream roles are ones Norbert Leo Butz have originated.

Second would be to play Elder Price in “The Book of Mormon.” That show is pure genius.

number 3 would be to have a significant character on Doctor Who. I’m not british so I doubt they’d ever take me on, but it’s my favorite show and in a perfect world the Doctor would be looking for an american male to travel with. Or rather an imperfect world.

The show “House” is a huge favorite of mine. It’s been a long time dream of mine to be a patient on that show.

One that’s pretty up there would be to work with David Tennant. He’s my favorite actor and I think I could literally die happy being opposite of him in something. Him and Andy (Lincoln) are actually pretty good friends apparently. I secretly hope he’ll introduce me sometime. Hint hint if you’re reading this Mr. Grimes.

WDBr: You’ve been acting since you were 15, when you still were in the school, right? In your career, who has always been a font of inspiration?

In all seriousness, I went to highschool with this guy named Chase Peacock. Him and I were never really that close, so this might be a little weird, but he was always way more talented than anyone his age should have been. He had a lot of dedication, and a lot of drive that really inspired me. After seeing him play the scarecrow in “The Wiz” I joined the drama club. Last year he made it to Broadway with the show “American Idiot.” Seeing someone I know achieve a dream like that really pushed me to stick to it.

WDBr: On your videolog at Youtube, you say that the TWD shooting were pretty close from your house, in Atlanta, Georgia. You also say that you can’t give detailed information about your participation on the show. Where did the idea of posting videos on Youtube came from? Do you intend to keep it?

JAM: I’ve been a long time subscriber to a ton of youtube personalities, mainly Philip DeFranco, Barats &Bereta, Derrick Comedy, BritaNick, etc. I just love that community and I think people really like seeing into the lives of others like that.

I like the idea a lot, but the thing is if all you do is just talk to the camera about your day, and people get used to seeing you as a regular person, it’s difficult for them to see you as the character, and I don’t want to distract the audience from my performance, so I’m not sure if I’ll keep it or not.

WDBr: What James likes to do in free time, when he’s not acting?

JAM: I watch way too much TV. I feel like most people are “Movie” people. For me, I’d rather watch two or three episodes of a TV show and know theres still more story to go. Other than that I have some pretty great friends I spend my time with a lot. When we get together we turn into 12 year olds and play a lot of old video games. My favorite is the Zelda series. Now theres a dream role. If there’s ever a Zelda movie, I would murder someone to play Link. Oh man.

WDBr: Have you ever been on Brazil? If not, would you like to come? The Walking Dead fans don’t know your work yet, but only by doing part of the cats, you become a very special person to us, Brazilian fans!

JAM: I would love to visit Brazil! I’ve never been but if people like me over there, I’m all over it! I hope I don’t disappoint. I’ve tried real hard this season to live up to the standards I know the fans hold. As a fan myself, I would want nothing but the best and I’m certainly going to try and meet expectations.

WDBr: What are your future plans? Do you wanna keep working on TV? If yes, TWD will give you a good receipt, right?

JAM: We wrap in November, and soon after the holidays I’m heading out to LA. I’ve got a lot of auditioning and stuff to do. I’m really hoping to branch out and get started on that list up there. Hopefully you’ll be seeing more of me in the near future! Keep an eye out!