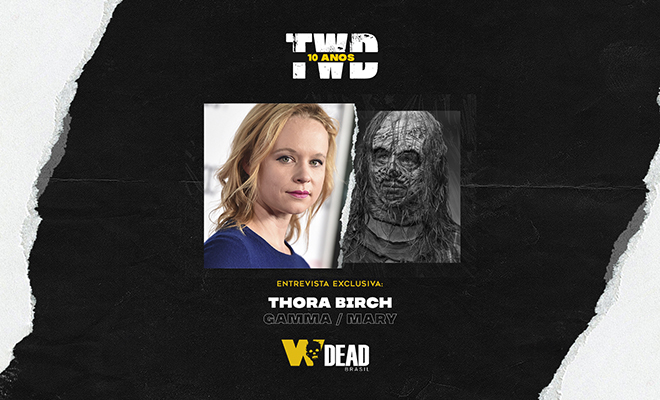 Our guest today is Thora Birch, who played Gamma/Mary during the season 10. The actress told us how special it was to enter TWD family, how it was to work with Samantha Morton (Alpha) and Ryan Hurst (Beta), about what could have happened if her character hadn’t died and much more!

Without further ado, check out our exclusive interview with Thora Birch:

The Walking Dead is turning 10! How was it to be part of such a big and lasting universe? Can you talk about how it was auditioning for the show? Being on it changed your life in any way?

Thora Birch: Being on TWD (and perhaps, specifically, season 10) was a total blast, and I was really jazzed about becoming a member of “TWD FAMILY”.I had heard the term before, but now that I’ve been inducted into the club, I see just first-hand how special that bond is between cast, the creatives, and the fans.It’s a wonderfully happy addition to my resumé.

Gamma was a memorable character on the show. The fans were following her story very closely and we saw some pretty difficult choices she had to make. Would you make the same choices?

Thora Birch: Gamma is, essentially, a prisoner of her times much as all the characters are on TWD.I saw her as bound by the sense of duty to protect herself and her sister.Yet, that goal leads both of them into a situation (joining the Whisperers and Alpha) which could NEVER end well.The decision she makes regarding her sister shows how muchbrainwashing was going on and perpetuated by Alpha and Beta against their own ‘followers.’Hopefully, I myself wouldn’t be drawn to Alpha’s belief system, and by the time the 10th season events were taking place, would have been a leader of my own group. 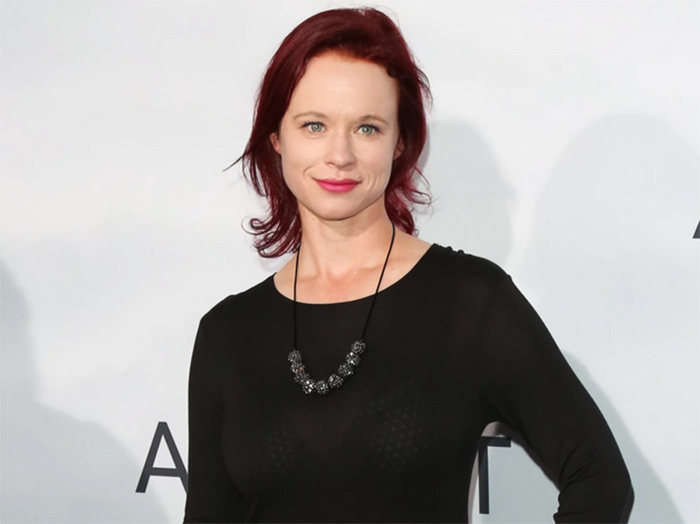 Your character was a great mystery to the fans, being exclusively developed for the show. In your opinion, is it better to play a brand new character, with lots of creative freedom, or one with a known backstory to work with? How was it on The Walking Dead?

Thora Birch: Gamma’s arc may not have appeared in the comic, buther journey was (I assume) always clear to Angela Kang, Greg Nicotero, AMC, etc.When joining the show, one realizes this is a well established universe with a very particular style and its’ own moral code, if you will.No matter what, every cast memberon there knows their days are numbered, lol.The fun is finding out when your number is up!

Gamma had a lot of scenes with Alpha and Beta. How was it to work with Samantha Morton and Ryan Hurst? How was the weather on the set It doesn’t look easy to work with lots of clothes and a mask in Georgia’s heat…

Thora Birch: I’ve been a fan of Samantha’s for a long time, so to get the chance to share some onscreen time with her was a true joy, and hanging out with her behind the scenes was even more of a gift.She’s a beautiful person.Ryan scares me, when he’s not making me laugh.He’s a top notch professional who takes things soberly and seriously when it comes to his character.The heat is another immediate point of bonding with cast and crew when one hits the set of TWD.Elbow greetings were already a huge welcoming and goodbye gesture because no one wanted the sweat exchange that would come with hugs, lol.

We don’t know much about Gamma’s past – from before the apocalypse or even before she joined the Whisperers. All we know is she had a sister, Frances, and her parents’ names were John and Alice. What else was revealed to you by the writers so you could make up the character? Was there something about her the only you knew and didn’t make it to the final cut?

Thora Birch: I don’t think the writers had time for Mary’s backstory; they have plenty of other things to worry about! 🙂 The only thing I knew for certain that others didn’t at the time was that, unfortunately, there was no hope for Mary’s survival for too long.

Thora Birch: In no version of her fake future do I see her abandoning her nephew.Maybe she would attempt to fold herself into the realm of the “Heroes” for awhile as a thank you for them not killing her or casting her out.But once her nephew becomes easier to travel with…would she stick around?Hard to say. She might not be able to fully trust groups or hierarchies ever again after her time with the Whisperers. 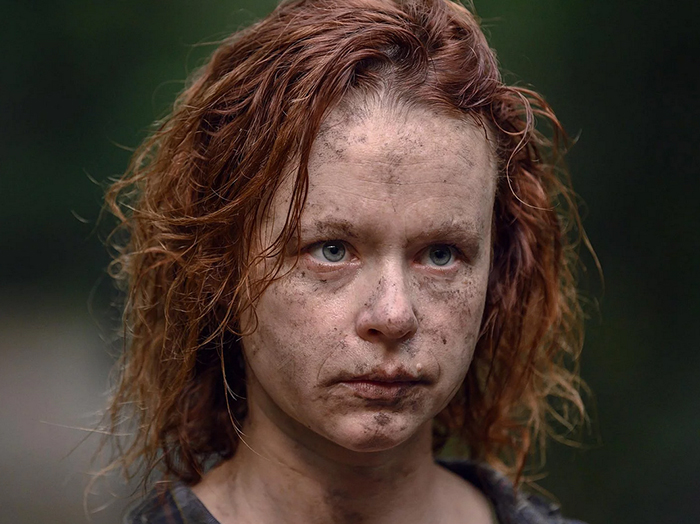 You had the opportunity to play Gamma in three different stages: as a human, as a Whisperer and as a walker! Which one was your favourite? How was the process of “zombification”?

Thora Birch: Hard to say… It might be easy to distinguish a favorite if at any point Gamma had been given a shower. lol zombification was a trip.Loved the whole process except for maybe the FX eye lenses.I don’t wear contacts, so that was a new experience for me.Talk about blurred vision!

Thora Birch: Awww… I couldn’t choose one!I don’t see how it could have happened or made any sense considering Gamma’s circle, but I would have liked either Gamma or Mary to have had some time interacting with Daryl, Negan, and Carol!

Thora Birch: Each episode was challenging in its own unique way, and it would take too long to get into.I will say I loved filming the Hilltop battle.I felt like a little GI Jane figurine being tossed around by some 4 year old budding pyromaniac throwing a temper tantrum.

You’ve been in many different movies over the years and surely you have a favourite. If you had the opportunity to play one of your past characters again, who would you choose? Why?

Thora Birch: There are a few characters I’d love to revisit.I still want to know what became of Sally Ryan from “Patriot Games”!I couldn’t pick ONE though, because I’d be too fascinated to see what writers would come up with for my favorite characters.

Thora Birch: Right before shutdowns started happening I had just shot a film entitled “Thirteen Minutes,” so I was looking forward to a BIT of abreak.Not as long as the one I got, for certain.Projects I had in development have been put on hold.Hopefully as we head into the later months of the year, the scheduling will start to begin for real.