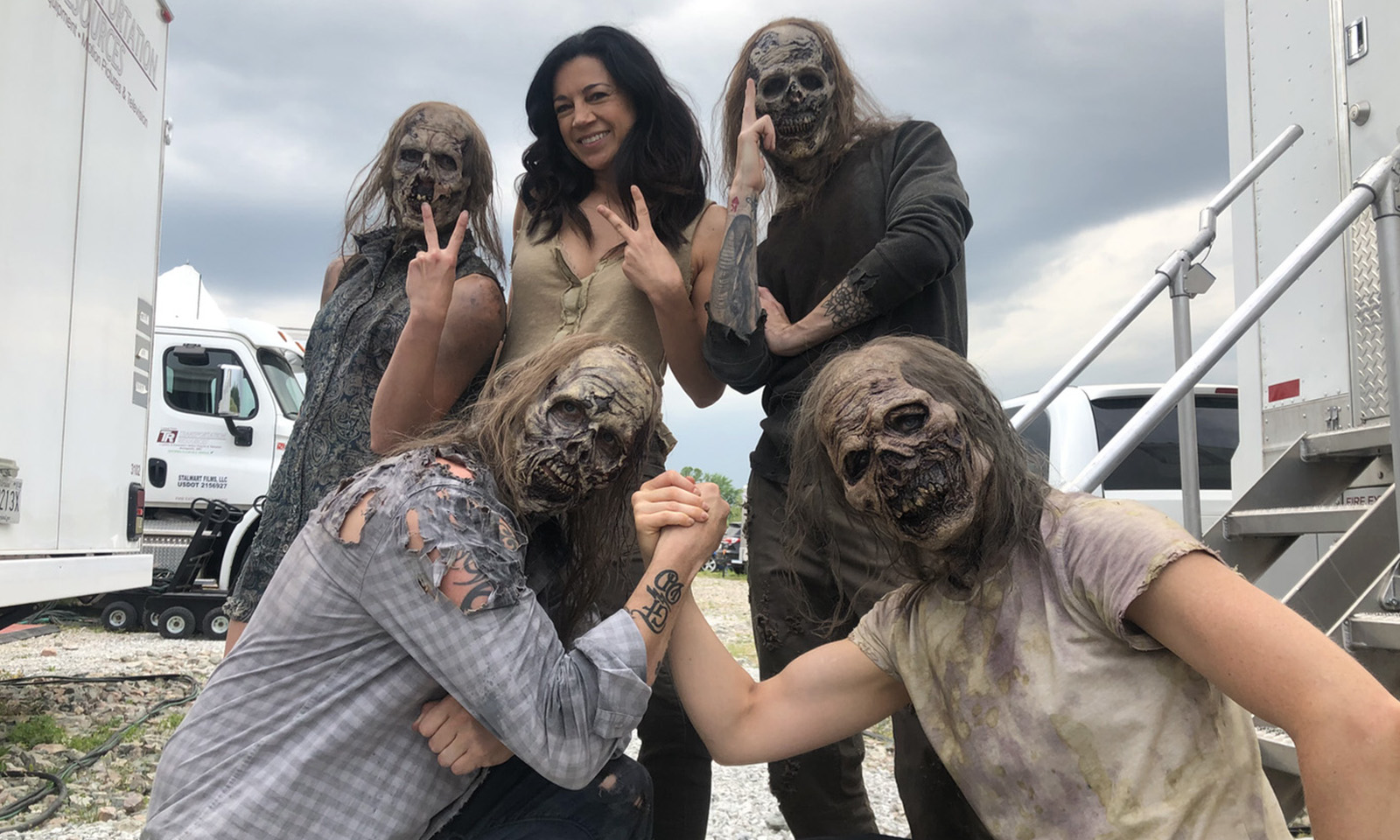 The Walking Dead: World Beyond expanded the “The Walking Dead Universe” and dived deep on a new mythology and history that follows the first generation raised in a civilization in the post apocalyptic world. The show had two seasons and finished last year, leaving the destiny of many characters in the open.

The The Walking Dead BR chatted with the actress Anna Khaja, who plays Indira in TWD: World Beyond, to know more about her moments in the show. Anna told us about her happiness on getting the role in the TWDU, her inspirations in giving life to her character, if we going go see Indira again and a lot more.

Without further ado, check out our exclusive interview with Anna Khaja: 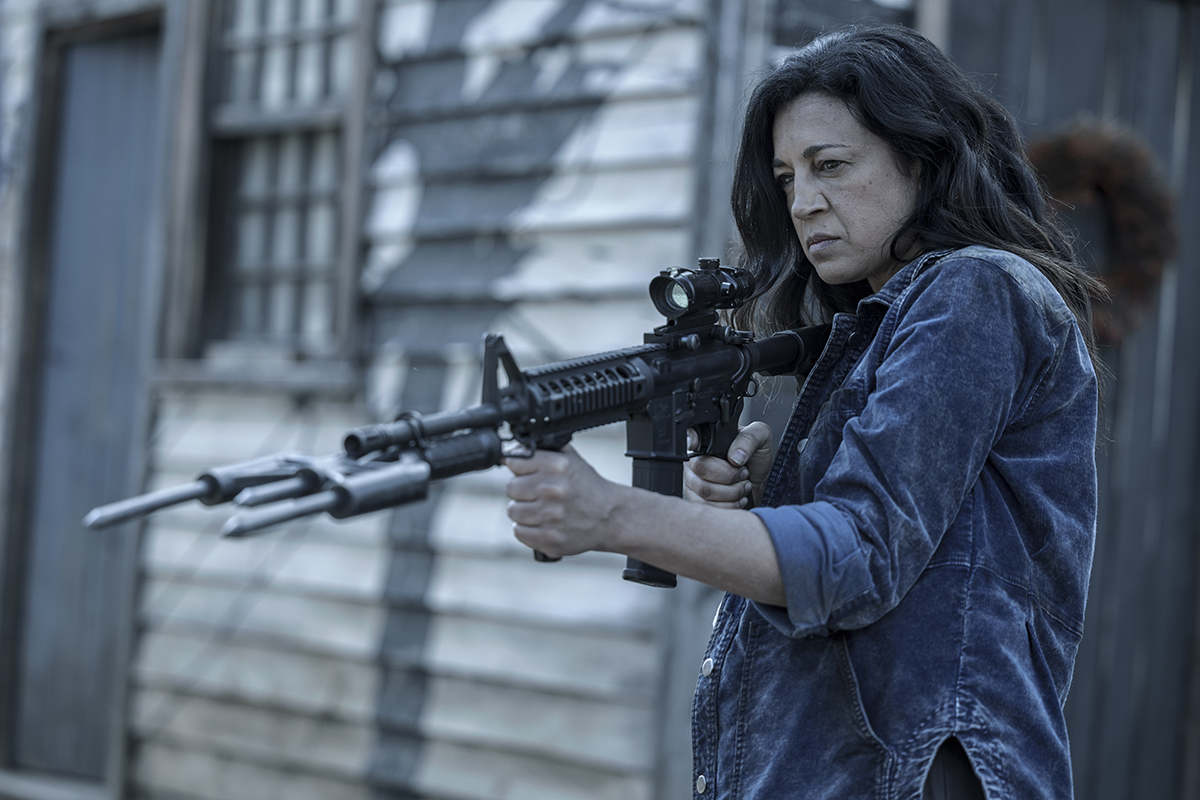 Hi Anna! It is a great pleasure for us to talk to you. Thank you for the opportunity! To begin we’d like to known about your experience fighting zombies for the first time in your career and how it was being part of The Walking Dead Family. Could you start by telling us what it was like to be part of this project. How did it come up and how was your audition process? Did you know The Walking Dead Universe before getting the role?

Anna Khaja: Hi Rafael and João Pedro and everyone! I’m SO happy to be talking to you! BR fans are amazing.

Fighting zombies IS as fun as it looks. I never got to have close combat, but showing up with the giant machine gun in the finale was really cool. The producers arranged for me to practice safely before the actual shooting day. And, when I saw the size of the gun, I couldn’t believe it. They had brought in a military expert and an armorer to make sure everything was done safely. Watching the zombies coming at you, and then watching them fall is a very memorable experience.

When I was told I’d be auditioning for the show, they gave me fake scenes and a different character name, so I didn’t really know much. It was early in the Covid pandemic, so I sent my own recording in to casting. A few weeks later, I heard I was being strongly considered for the role. When I learned I had the job. I was so excited to be part of such and incredible franchise.

After that, I met with Matt and Loren, but still hadn’t seen any scripts. They told me about Indira, and what her past was like. They wouldn’t give away many secrets about what would happen to her over the season though. I usually had to wait until a couple of days before we shot to know what was next for Indira. When I read about Dev dying, my heart sunk for Indira.

Coincidentally, I had worked with Alexa, Joe and Abu (who plays my son Dev) on previous projects, so it was nice to see welcoming and familiar faces at the first table read. 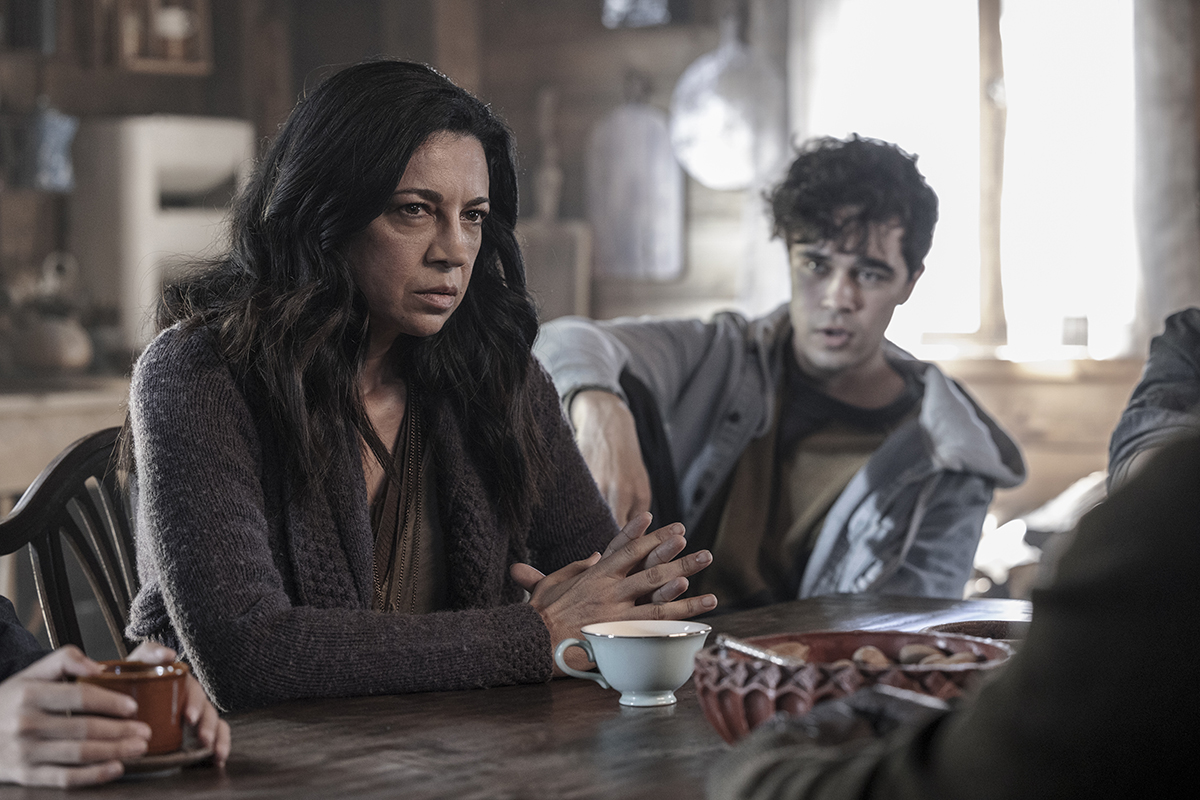 In all of the “The Walking Dead Universe”, maybe it is in World Beyond that they most present women of color in leading positions. How do you see the influence of characters like yours in the media? How important do you think this representation is to other women?

Anna Khaja: YES. This was a huge reason why I wanted to be a part of the show. I respect their casting decisions so much. As a woman of color, if I had had female role models on TV like Hope and Iris when I was young, it would have greatly affected my confidence, and how I saw my place in the world. I am so proud of our show for having that positive impact and for its mission to show young women of color how powerful they are.

Can we believe we’ll be meeting Indira and her Perimeter people in the future? Knowing that she stayed with Leo, Hope and the team of scientists, how do you think she’s being helpful to them right now?

Anna Khaja: I would love for Indira to come back. She and her people have been very independent survivors, living off the grid for a long time. Until now, Leo and his fellow scientists haven’t had to tough it out. I think Indira and her people are going to be essential in helping the scientists survive, so they can continue to research and find answers.

What’s your favorite moment shooting The Walking Dead: World Beyond? Do you remember something funny that happened on set to share with us?

Anna Khaja: There’s a video on line of some of us trying to throw pebbles into a hole in a barrel between takes. It’s so silly. That wasn’t my favorite moment but I think it sums up what it was like behind the scenes. At the Perimeter, we had a lot of fun. We’d play word games between set ups, and just find silly things to keep us entertained. I think it really bonded us. 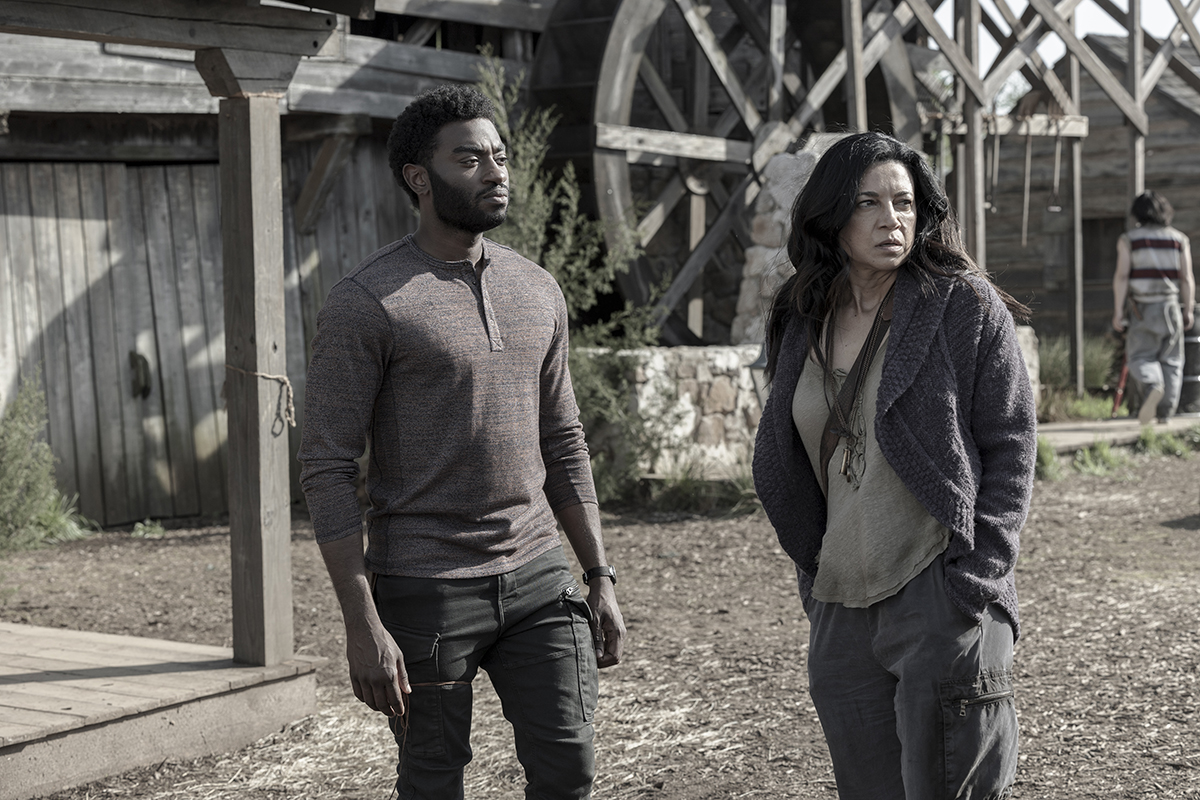 Indira is a character with a background that goes beyond the drama of leading a community, she also has the responsibilities of a mother and have to fight a major illness. How was your preparation to play the character? Did you get inspired from someone to bring Indira to life?

Anna Khaja: I have known many women like Indira in my life, especially my grandmother. She was an exceptionally good person with a lot of responsibilities on her shoulders. And she never complained. I look back now and think about how tired she must have been, but how she never complained. I tried to bring this to Indira. Everyone looks to Indira to keep things running smoothly. She helps others even when it’s a risk. She’s sick, but she’s never going to act like a victim. She doesn’t have the time or energy to worry about sick she is. I believe women like this keep the world going and are unsung heroines. I was keeping that in mind when I played her.

Looking back on your time on the show, what was the most fun episode to shoot? And which one was the most challenging? Why?

Anna Khaja: Episode 8 was the most challenging AND the most fun. In that one episode, I learn that my son was killed, I confess to my people, I choose to step down as the leader of the Perimeter, we have to leave our village, and the CRM destroys our village and tries to kill us. It was a lot!

The shoot-out sequence was shot over the course of two days. It was hot, of course, and we were crawling on the ground for hours. But, I loved having that “hero moment” when Indira shoots down the CRM officer and saves Asha. 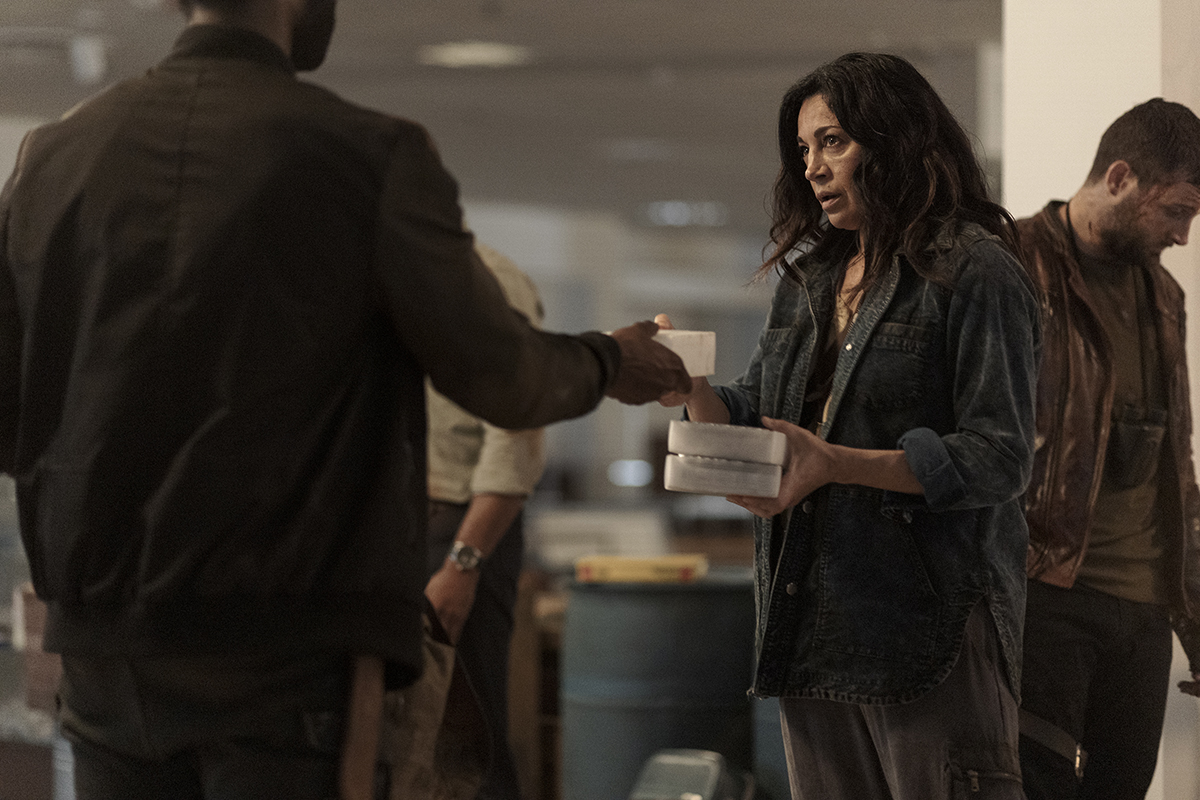 How was the recording environment like, considering the COVID-19 protocols?

Anna Khaja: AMC worked hard to keep everyone safe. Cast and crew were tested several times a week, and every one on set wore a mask except when on camera. And, we all found ways to connect and form bonds, and do our work, despite the limitations.

You already wrote and starred in solo plays, participated in other movies and TV series. What makes starring in The Walking Dead: World Beyond different?

Anna Khaja: The mythology and the fans. The fans are the BEST. So kind. So committed. It’s amazing to be part of the Walking Dead family and universe – I have an instant feeling of belonging. I’m really honored. THANK YOU.

And I love all the ways the mythology provides us an escape, but also feels relevant to real life.

You recently posted on your Instagram an item used by Indira (a necklace with an hourglass and a magnifying glass). What does it mean to the character? We were also curious if you kept any other items from Indira after the recording was over.

Anna Khaja: Yes! Those two items were chosen together by me and the costume designer. We wanted Indira to always be wearing something special and symbolic, that had a hidden meaning to her, that she carried with her. We don’t know a lot about Indira’s beliefs yet. But, we know she seems to have strong ones. I was sad to say goodbye to those items, but you never know when Indira might need them again… 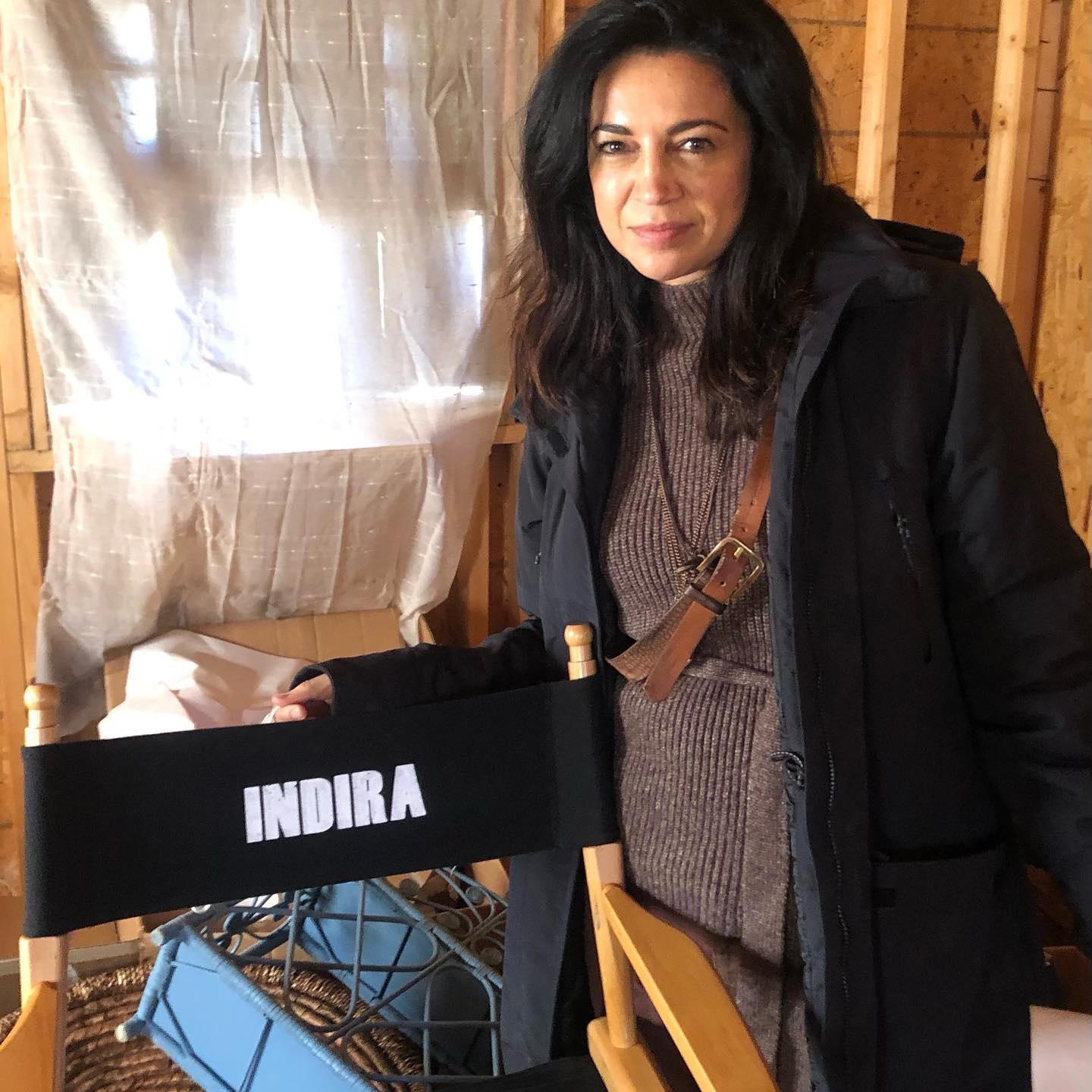 If you could be another character in World Beyond (or The Walking Dead Universe), which one would you be? Why?

Anna Khaja: Michonne! She’s brave, tough and goes through so many challenges. And Danai Gurira plays her so beautifully.

Speaking about the zombie apocalypse… What would Anna Khaja have in her survival kit? Choose 5 must-haves items! Would you be more the type that would be in a community or a solitary survivor?

Now that I’m looking at my list, I’d better be in a group if I want to survive. Maybe they can lend me some water… or a katana.

What are your future projects and where else can we see you?

Anna Khaja: I just finished up on a project in another universe. I’m not allowed to share about that one yet. I’ll also be on three TV shows coming up: The Sex Lives Of College Girls on HBO, Bull on CBS, and the Lincoln Lawyer on Netflix!

Anna, thank you so much for your time! I hope we can meet in person one day. Have you already come to Brazil? If not, would you like to?

Anna Khaja: Thank YOU so much. I would love to meet you or maybe we can do a skype interview. I haven’t been to Brazil yet, but I have friends from your country, so I already know you have the BEST FOOD. I really want to go!