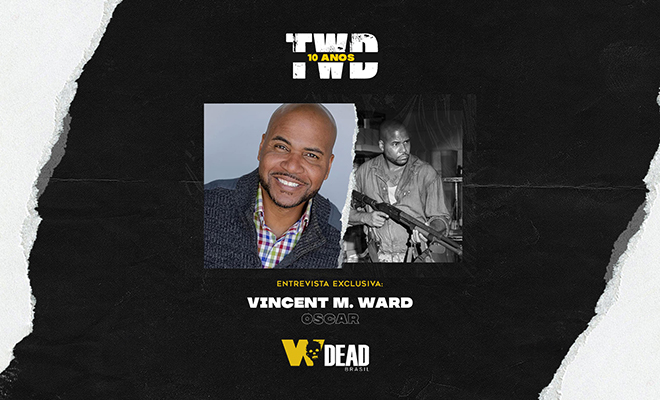 Our guest today is Vincent M. Ward, who played Oscar in season 3. The actor told us about working alongside Andrew Lincoln (Rick), about a funny moment with the family on the set of The Walking Dead, about the job as an actor, about his new projects and much more!

Without further ado, check out our exclusive interview with Vincent M. Ward:

Vincent M. Ward: I actually auditioned on tape for a character named Mouse… I actually had never heard of the show, I was just trying to get a job… I don’t put one show above another and of course you want to book every audition you get because you never know when you will get another chance.. 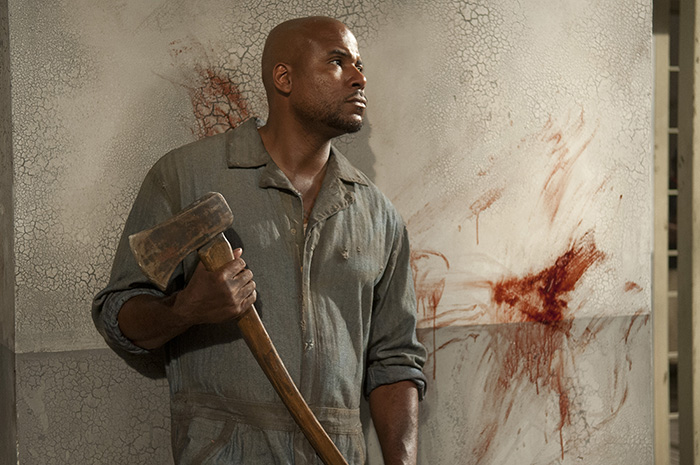 Oscar was part of a very important arc from the comics, The Prison, but he was created exclusively for the show. Did you to read the comics to get familiar with the story? How did you prepare to play Oscar?

Vincent M. Ward: I didnt know about the comics neither… Oscar reminds me of myself when it comes to loyalty and doing what it takes to provide for my family but the difference is Im not going to jail to provide for them… Nope!!! Vincent M Ward loves his/my freedom.

Oscar was the last of the prisoners to die, and the only one to live outside the pison in the apocalypse. Did you already know you were gonna be one of the longest living convicts? How and when did you know he was going to die?

Vincent M. Ward: No I didnt know because you dont know other peoples contracts..Sometimes people become a fan favorite and get a new contract and possibly stay around longer..

Your character was very close to Rick Grimes in battles. How was it to work with Andrew Lincoln?

Vincent M. Ward: Andrew is the ultimate professional and he was by far my favorite to work with and get to know as a person beside Lew Temple aka Axel..

We know nothing about Oscar’s past before the apocalypse or before being arrested, only that he was convicted of theft and transferred to that prison. When you played him, did you come up with some backstory or it wasn’t as important? Did the writers tell you anything about him to help you?

Vincent M. Ward: No, no and no…lol…I just went in with passion and followed the direction of the director..I never knew what Oscar was in jail for until Axel said, Oscar is in jail for B & E and he wasnt good at it…lol 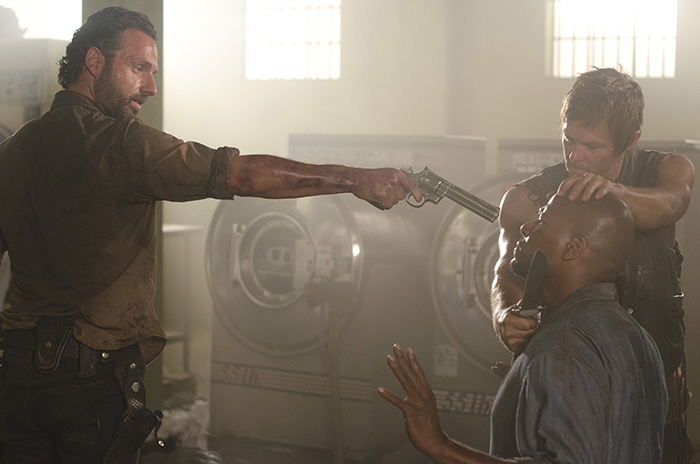 How was it to be on the prison set? Do you remember any funny moments from behind the scenes you could share with us?

Vincent M. Ward: I love being on set because it makes you feel grateful to be working…Only funny moment is when my family visit the set and my nephew was small so we didnt want him to see the walkers so I took them to the inside part of the prison and even though he didnt see any walkers he knew something bad had been in there and this little guy stopped walking, looked around start screaming and took off running for no reason…

Vincent M. Ward: The episode when I could’ve shot Rick with his gun, I loved that scene…The challenge was always filming outside because it was sooooooo hot…The sun is undefeated…

Vincent M. Ward: First day not knowing what to expect and just getting to know everyone and of course feeling sad on the last day because you dont want it to end…Also being sad for anyones last day because you never want to see anyone lose a job especially when everyone is cool to work with..

If Oscar had survived longer on the show, with which characters would you like him to interact with? Is there any actor you’d like to have worked with more closely during your time on the show?

Vincent M. Ward: Rick…I thought Oscar done enough to be a part of the group more and help fight the Governor… I would just say the group or evening teaming up with Chad Coleman aka Tyreese…I have a lot of respect for Chad as an actor and person…I wish I had more scenes with Scott Wilson…Hershel… Just getting knowledge from him but we had fun hanging out at the conventions, Scott was very fun, trust me… 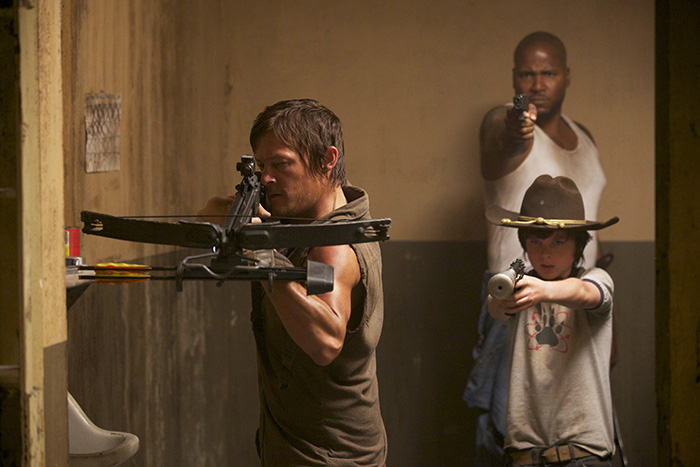 What steps do you follow to start playing a new character? Do you have a kind of ritual before getting into scene? How do you prepare?

Vincent M. Ward: Most of the characters kind of fit me so its not a lot of prep…I just focus on the lines and feelings….I hate messing up on my lines which makes it hard to sleep at times because I go over them when I sleep and if I mess up on them while I sleep I will get up and look at my script…I try to be a true professional..

Vincent M. Ward: No I dont watch it and it’s not because Im no longer on it..I think they should bring Oscar back and then end 4 seasons later…lol

Talking about a zombie apocalypse… What would Vincent have in his survival kit? Choose 5 indispensable items! Would you be more of a community survivor or a lone wolf?

Vincent M. Ward: Food, water, weapon (gun, machette) some kind of music player that didnt have to be charged a book…Im more of a group guy but I could survive by myself..

You work as an actor since 2000, right? Did you choose this career or did the career chose you? What tips can you give to people who dream of becoming actors?

Vincent M. Ward: It chose me because I kept getting fired from good jobs for no reason but God had a different plan for my life…What we might think is a negative could really be a positive to push you into what u really should be doing in life… This is a very hard career but once your’re in there and do what your supposed to do it could be rewarding….Yes Ive been in it since 2000 but I feel Im at the beginning because my goals are high…Im not where I want to be but Im not where I use to be.. 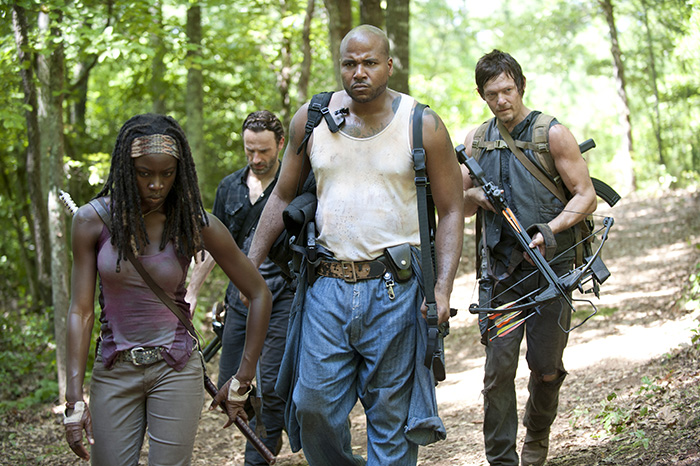 Vincent M. Ward: A lot has been postponed but especially the one’s Ive created like my travel show called CONVENTIONING, my horror movie Devilreaux…I just finished filming Social Disturbance, Amityville Moon and about to start Playground and Amityville Rising its a trilogy about Vampires, Wolves and Zombies… I have a lot coming out that I finished before the pandemic….Im just trying to stay mentally, physically, spiritually and emotionally healthy because mental worries can break people down and I need my mind to be on tact…I have 13 grand kids that need me to be around to be a positive example and leave a legacy for..

Vincent M. Ward: Much love to you and the fans of Brazil and once this pandemic is over I promise you Im coming to see the beautiful country, delicious food, great people and learn more about the awesome culture… Thank you for your support and love for the show and in the words of Oscar….I aint never pleaded for my life and Im not about to start now, so you do what you have to do… Peace.