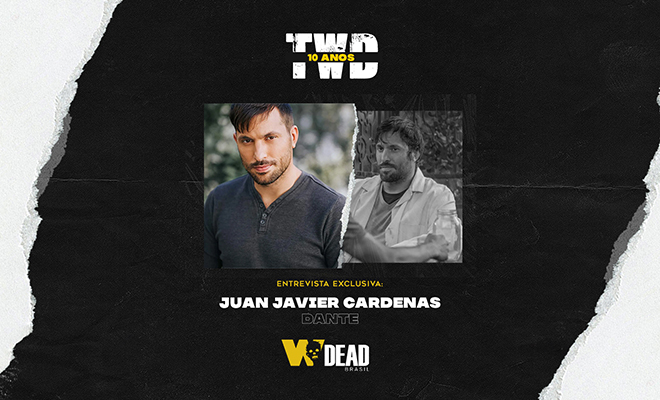 Our guest today is Juan Javier Cardenas, who played Dante in season 10. The actor told us about working alongside Avi Nash (Siddiq), about the similarities and differences between him and Dante, about the fun atmosphere in the set, about his future projects and much more!

Without further ado, check out our exclusive interview with Juan Javier Cardenas:

First of all, it’s a great pleasure to be able to talk to you in such a special occasion, The Walking Dead’s 10-year anniversary. Can you start talking about how was the experience of being part of the show? How did the project get to you and how was auditioning for it?

Juan Javier Cardenas: It was an absolute blast. On my first day, I found myself in a scene with a life-sized crashed Russian satellite, blazing fire pyrotechnics, about thirty Alexandrians running through the woods with water hoses, and about forty or so actors in full walker makeup getting chopped up with knives and swords. I took a look around, amazed by it all, and thought, “Welcome to The Walking Dead!” The audition process was very interesting and shrouded in a bit of mystery. I auditioned with a script that was totally different from what you see in the show, reading for a character with a different name than Dante. The whole experience definitely kept you on your toes. 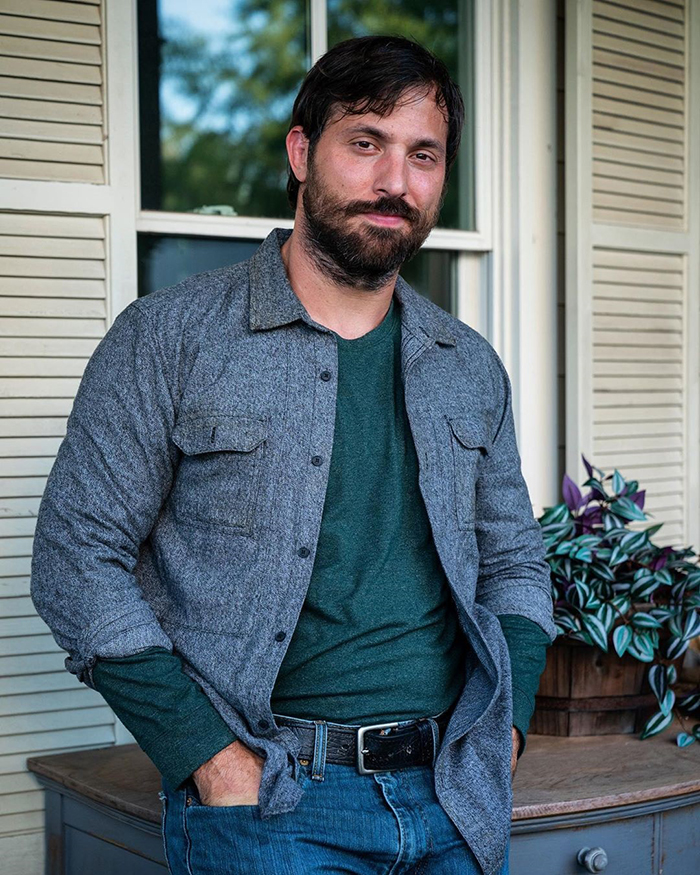 When we heard Dante was coming to the show we associated him to his comic book counterpart: a nice Hilltop guy who turns out to be Maggie’s love interest. But this didn’t come true and the show’s Dante turned out to be an inside man for the Whisperers. Did you know the comic book character beforehand? If yes, how did you react when you got the news the only thing your character would share with him was the name? How did you think the fans would react?

Juan Javier Cardenas: I grew up reading comics so I was familiar with the comic book when it first came out. I wasn’t familiar with the Dante storylines until I ran to the library and read every comic where Dante appeared, after they told me I had the job! Honestly, I was really excited when I was told about the twist they were planning with Dante, because then I knew I was going to be able to really craft my own, unique take on the character.

Juan Javier Cardenas: Something very similar: I can definitely talk way too much, when I should really be listening instead! Something very different: I’m not actually a desensitized, psychologically-damaged, killer!

Dante’s betrayal was a fan theory, but when it got confirmed it still caught a lot of people by surprise. He was a cool guy and very charming, but everything changed after that. How did it feel for you to lose the sympathy of the fans?

Juan Javier Cardenas: I know going in that the character change was going to be a shock to people. With The Walking Dead, you have a combination of two really enthusiastic fan groups: comic book fans, and horror/sci-fi fans. When I saw how much it shook (and in some cases) frustrated some fans, I just took it as a validation of all the hard work we all put into crafting the drama of Dante’s storyline. We really affected people, pulled viewers out of their comfort zone…that’s what you want good storytelling to accomplish. 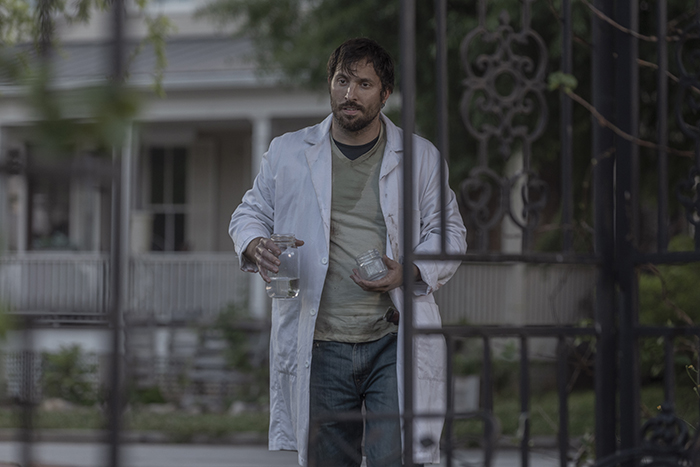 You and Avi Nash (Siddiq) shared a lot of scenes together. How was it to work side by side in the development of the characters up until Siddiq’s death?

Juan Javier Cardenas: I had a blast working with Avi! Easily one of the best scene partners I’ve had the pleasure to work with on a set. Up until our last day acting together, Avi really cared about the moment-to-moment progression of our characters’ story. He also made me (a brand new visitor to TWD world) feel immediately welcome as a part of the “team.” Working through Dante’s friendship with Siddiq, I had to make specific choices as to where Dante would be lying, wearing his “mask”, and then pinpoint where would be the moments where he might actually reveal parts of his true self.

How did you prepare for Dante’s death scene? How does an actor prepare for a scene like that?

Juan Javier Cardenas: You just have to understand what story the writer is trying to tell about the character in those scenes. A lot of my final pieces of dialogue were Dante revealing his perspective of the world as a Whisperer, and how frightening the Whisperer cult’s philosophy on human nature and civilization is to the survivors of Alexandria. His words are meant to shake the foundation of the main characters’ sense of safety, and push them to their breaking point (specifically in the case of Father Gabriel). Once you understand your objective, the scenes fall into place.

If you could choose another way for Dante to die, how would you like it to be?

Juan Javier Cardenas: There’s a small lake in Alexandria that sits beside the “infirmary” building where I shot most of my scenes. It’s cloudy and murky, and I always thought it looked a little creepy, especially at night when we wrapped shooting. Dante getting forcibly held underwater and drowning violently would be pretty brutal! 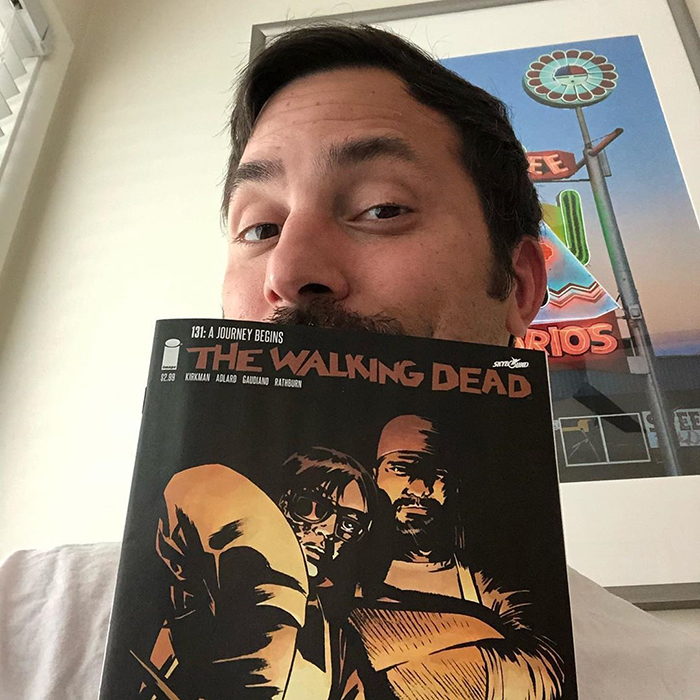 I’ve heard Avi Nash knew all about the characters’ fate and you were the only person he told it about. Tell us how it was to work after knowing what would happen to yours and his character?

Juan Javier Cardenas: I respected Avi as a scene partner, knowing that he, as a performer, really cared about these final moments of his character’s story. I’ve been in the same position as him before, creating a character from the ground up and then saying goodbye to it when your character gets killed off a show. I just tried to do my job as an actor and help him craft our characters’ relationship in an honest way.

One of the reasons we liked Dante so much was his funny and charming personality when interacting with the other characters. How did you develop this character?

Juan Javier Cardenas: A lot of it was looking at the original comics and seeing how the original Dante kind of used humor to ingratiate himself with the other survivors, but also sometimes mask his own insecurities. Honestly, a ton of it was just having fun on set with Avi and the other actors. The vibe on set for The Walking Dead is a very welcoming one, which makes you feel really comfortable and free to have fun with the character.

Juan Javier Cardenas: I definitely remember my first day on set. I showed up for my first scene, and within ten minutes, the director Greg Nicotero took me aside, and revealed the entire Dante/Whisperer spy twist! The reception on set was really warm, especially from director Greg Nicotero and shower runner Angela Kang. They were like big kids on set, just as excited as the actors to begin work on the new season! Farewells are always bittersweet on shows where you enter into these peoples’ world for a short while, work intensely with them crafting incredibly emotional and heavy stories, and then saying goodbye soon after. You feel really proud of the work you’ve done with your coworkers, but you don’t know for sure in this business if, or when, your paths will cross again. Everyone was incredibly gracious and kind to me when I left after my last day. 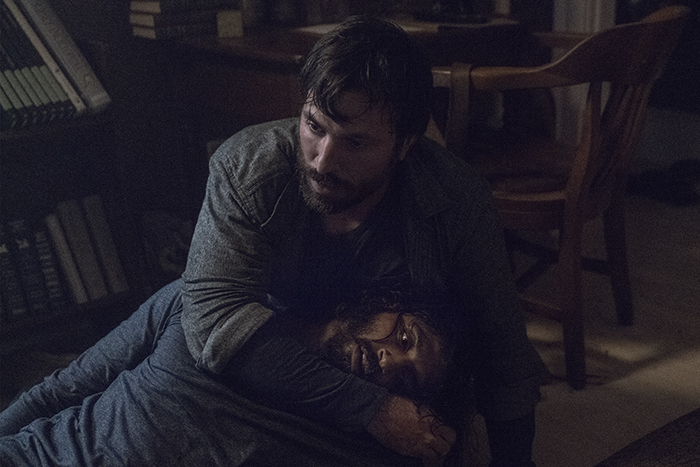 Juan Javier Cardenas: The “Siddiq death” episode was the most fun AND the most challenging to shoot. It was the most fun because my scenes in that episode were the juiciest, most complex, and emotionally charged of my entire character’s story arc. It was also the most challenging episode just because it was so exhausting! Both Avi and I really wanted the fight to be real and brutal, messy and chaotic…we knew that if we ended the shoot and were NOT beyond tired, then we didn’t do our jobs right!

We know sometimes scenes get cut in the final edition of an episode. Did any of your scenes ever get cut or did all of Dante’s story was on the screen?

Juan Javier Cardenas: I believe mostly all of Dante’s story was kept intact on the screen. Some of the scenes may have been slightly shortened through editing here and there, but the character’s arc and the best moments between the characters remained.

Juan Javier Cardenas: I feel pretty lucky because during my run on the show, I think I met, or had at least one scene with, almost everyone currently on the show! I had a great time getting to know all the actors and would jump at the chance to work with each of them again on another project.

You’ve been in many other shows, playing a variety of characters. If you choose one of them to be a survivor on the Walking Dead – either a good guy or a bad guy – who would you pick, and why?

Juan Javier Cardenas: I played a character that I loved called Lew Nez on the show “Damnation” a while back. He was an ever-roaming, hard-drinking cowboy outrunning the law for bank robbery with knowledge of explosives. I think he’d fare pretty well in the apocalypse.

Juan Javier Cardenas: Unfortunately, the pandemic really hit the film and television industry hard. It’s affected most everyone in the arts because all production and auditioning was shut down full stop. I wasn’t involved in a project when the pandemic hit, so I’ve taken the break to be with my family and concentrate on them. A positive side to it all, is that my wife and I had the time to work with each other in writing and developing ideas for short films and projects of our own. The long term goal is to self produce original films (shorts and features), working with artists and friends we respect and care about.