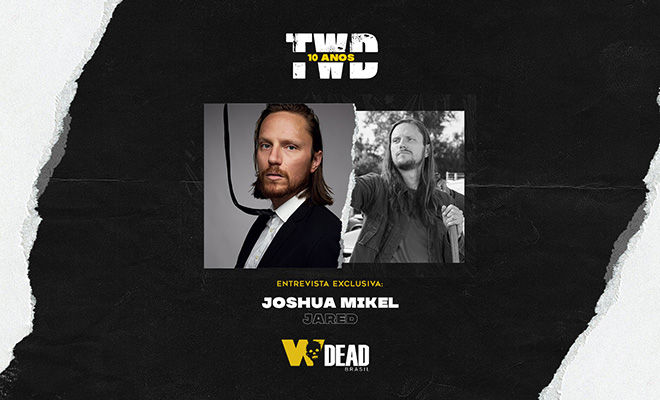 Today we’re having Joshua Mikel as a guest. He played Jared on seasons 7 and 8. The actor told us how was it to work with Lennie James (Morgan), talked about the makeup process for Jared’s death scene and playing a zombie on the 2nd season. In addition to that, he also told us about his participation in Black Lightning and a lot more!

Without further ado, check out our exclusive interview with Joshua Mikel:

Joshua Mikel: Thank you for asking me! I know Brazilians really love the show down there, & I wish we had more opportunities to come visit y’all.

I had auditioned for the show about 17 times starting in season 3 or 4. I never knew exactly what role I was auditioning for, because the sides I’d get would all be “dummy sides” (sides not taken straight from the script). In the episode in which Jared first appeared, I actually auditioned for Richard, Gavin, & Jared, & luckily landed Jared. I was so happy. 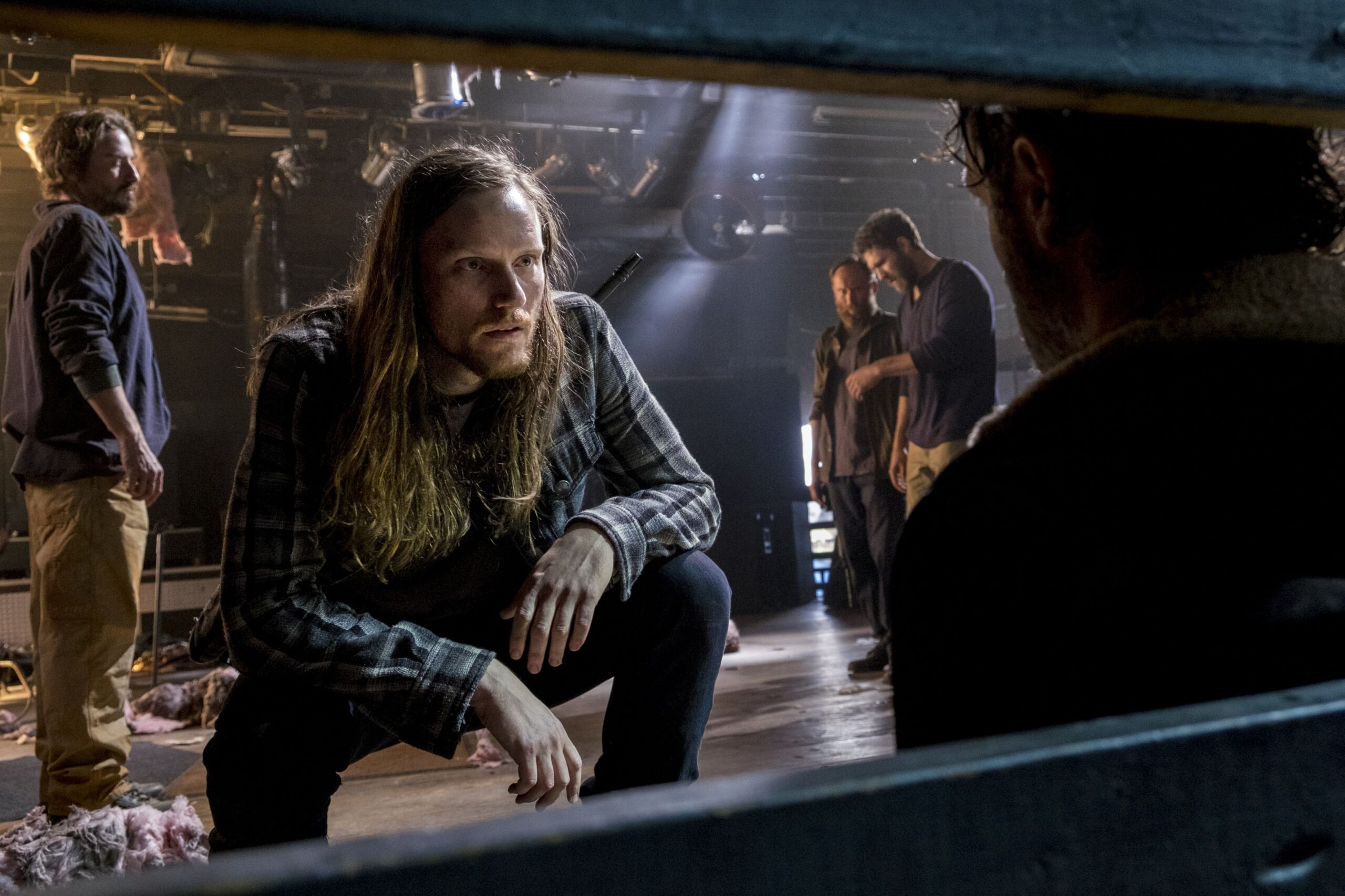 We know nothing about Jared’s past before the apocalypse. When you played him, did you come up with some background to help you build up the character? Did the writers tell you something to help with this process?

Joshua Mikel: The writers didn’t share a lot about where he came from, but I always said he was likely a “trust fund kid”- probably came from a wealthy family that was used to taking advantage of people, & the apocalypse only heightened his sociopathic tendencies.

Jared was part of one of the most hated communities on the show, The Saviours. During the Scares That Care 2020 convention, you revealed you wish Jared had a redemption arc that never happened. If you could choose, how would it happen?

Joshua Mikel: I would have loved to have had a chance to redeem myself by potentially saving someone with whom I’d had such a terrible history (Morgan, or perhaps Henry, having killed his brother). Just wasn’t in the cards.

Jared was persecuted by Morgan and had a brutal ending, being eaten up by zombies. How was it to work with Lennie James? How and when did you hear Jared was about to die?

Joshua Mikel: Lennie is the consummate actor, & it was incredible to be able to get to work with him. I have the utmost respect, & the days we would work together, I always cherished. To get to die at his hands was the icing on the cake.

About a week before we shot my death episode (814), I got a call from Scott Gimple (the show runner at the time) & he broke the news to me. I was bummed, but he promised I’d love my send off. He was right. Couldn’t imagine a better way to leave the show. 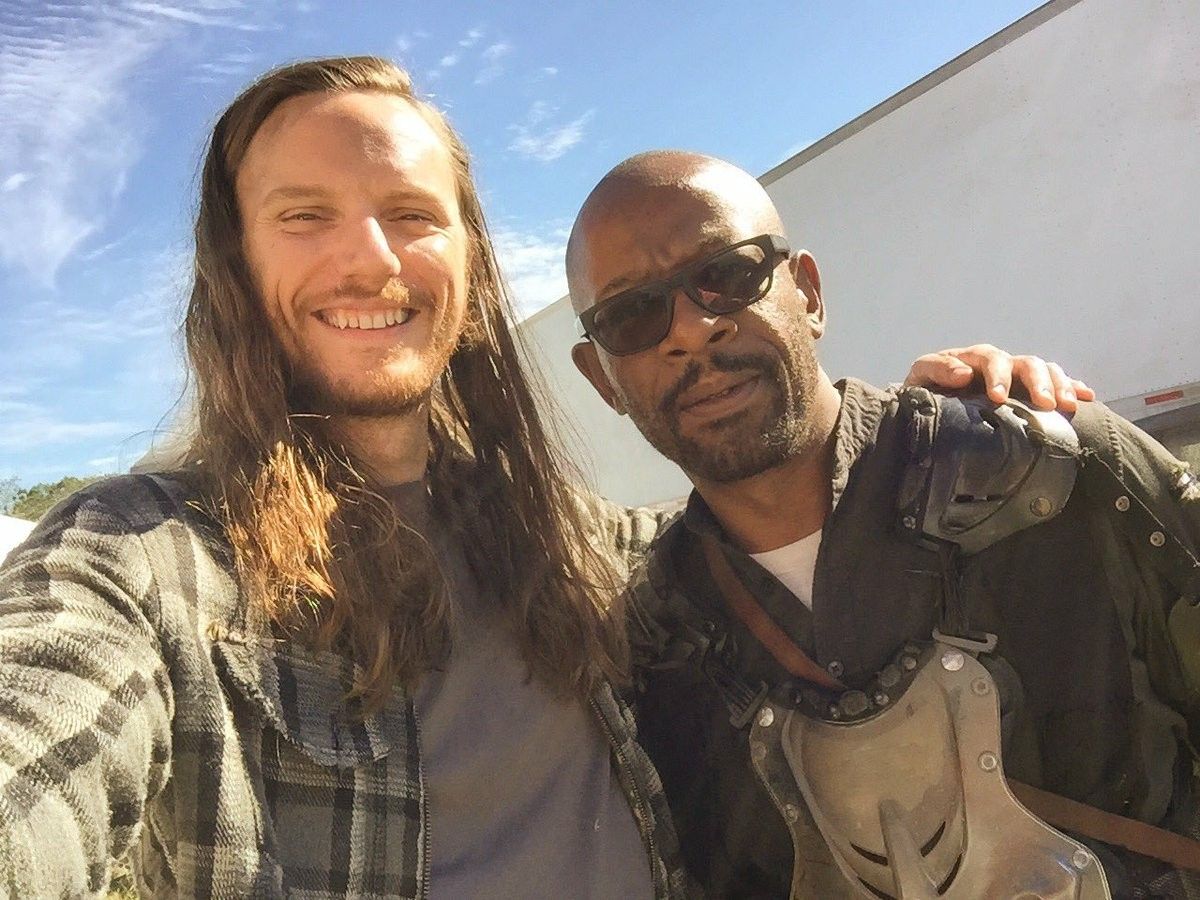 Still about Jared’s death: how was the process of make-up and special effects for the scene?

I had a cool prosthetic face piece that the walker bit off of me that exposed a blood tube they’d run up my neck that squirted out the goop. It was awesome.

Not everyone knows, but before being a regular actor on the show you had already been part of a horde in the last episode of the second season of The Walking Dead, right? How was that experience?

Joshua Mikel: I did! That was a wild experience. My roommate was working costumes on the show at the time, & she let me know there was a “rush call” for a bunch of walkers. I jumped at the opportunity to see how that show operated & drove down. They got me, along with about 100 other walkers, through makeup & costumes amazingly quickly, & we shot for a pretty long day. Was a blast.

Joshua Mikel: I loved our first day we shot with all the kingdom folks. Khary, Cooper, Kerry, Karl, Jayson, Logan, Lennie- that was a fun as hell intro to the show. They had real pigs in the bed of the truck!

The most challenging was the death stuff. There were a lot of logistics making that opening exchange work, & I was anxious to get through those days to the death. It was my first time getting to work with Andy- which was so lucky. Two days I’ll never forget. 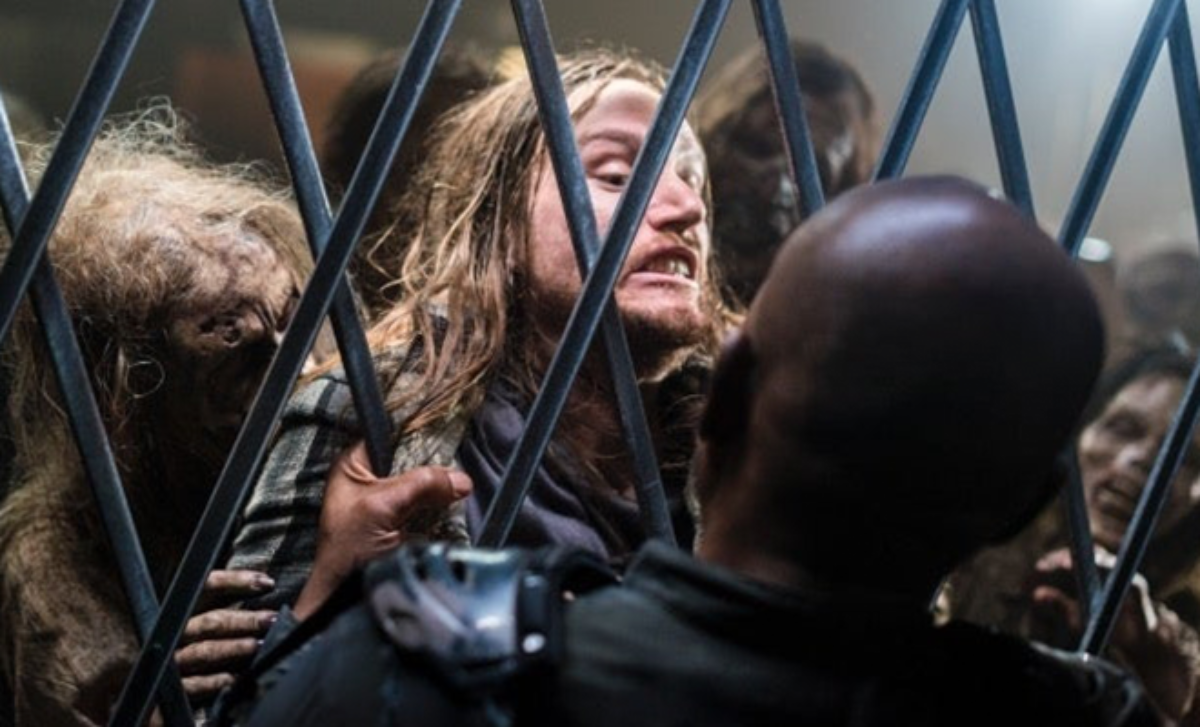 Joshua Mikel: The first day we shot what would be the exchange scene in episode 702. I was just so excited & anxious to be a part of that show I’d so long wanted to find a opportunity on. We all were having our first days on set (except Lennie, obviously) & that really brought us together over the coming months as we waited for share it with the rest of the world.

After I’d shot my death, I said my goodbyes, but then got a call about a week later to return for the season finale to haunt Morgan. I was floored to be coming back, & that scene was so much fun to shoot. I had nothing to lose, so I felt super comfortable. My last scene features a lot of the cast, so I got to say hello & goodbye to a lot of folks. A cool moment happened after I’d been wrapped & was driving off the lot for the last time, we had been shooting just up the road from stages, & who do I see walking back but Andy (he’d decided to walk back after he wrapped out) I got to say goodbye one last time, & thank him for being the genesis of a show that had changed my life & brought so much attention to Georgia.

If Jared had survived longer on the show, with which characters would you like him to interact with? Is there any actor you’d like to have worked with more closely during your time on the show?

Joshua Mikel: Gosh, that’s a tough one. I was bummed I never actually had a scene with Negan. I always thought that would be interesting to see- & to understand why Negan might keep around such a loose cannon as Jared.

Talking about a zombie apocalypse… What would Joshua have in his survival kit? Choose 5 indispensable items! Would you be more of a community survivor or a lone wolf?

Think I’d definitely be a lone wolf unless I managed to reconnect with friends/ family I trusted.

While you were in the show, did you get to know the aspects of directing, special effects, etc.? If you had the chance, would you like to direct an episode of the show?

Joshua Mikel: Would love to direct an episode. Don’t think something like that would ever be offered to me, but I think that would be a blast. I’ve directed a bunch of music videos through the years. www.vimeo.com/joshuamikel

You played a drug dealer in Black Lightning. And, differently from Jared, Steven Conners was pretty balanced and logical. How was it for you to bring this character to life? Can we still hope to see him again in the show?

Joshua Mikel: I haven’t died on that show yet, so I’m hoping I get to make a return!

I really loved playing a more thoughtful, grounded character like that. That’s a really fun show to work on, so I’m hoping they’ll have me back. 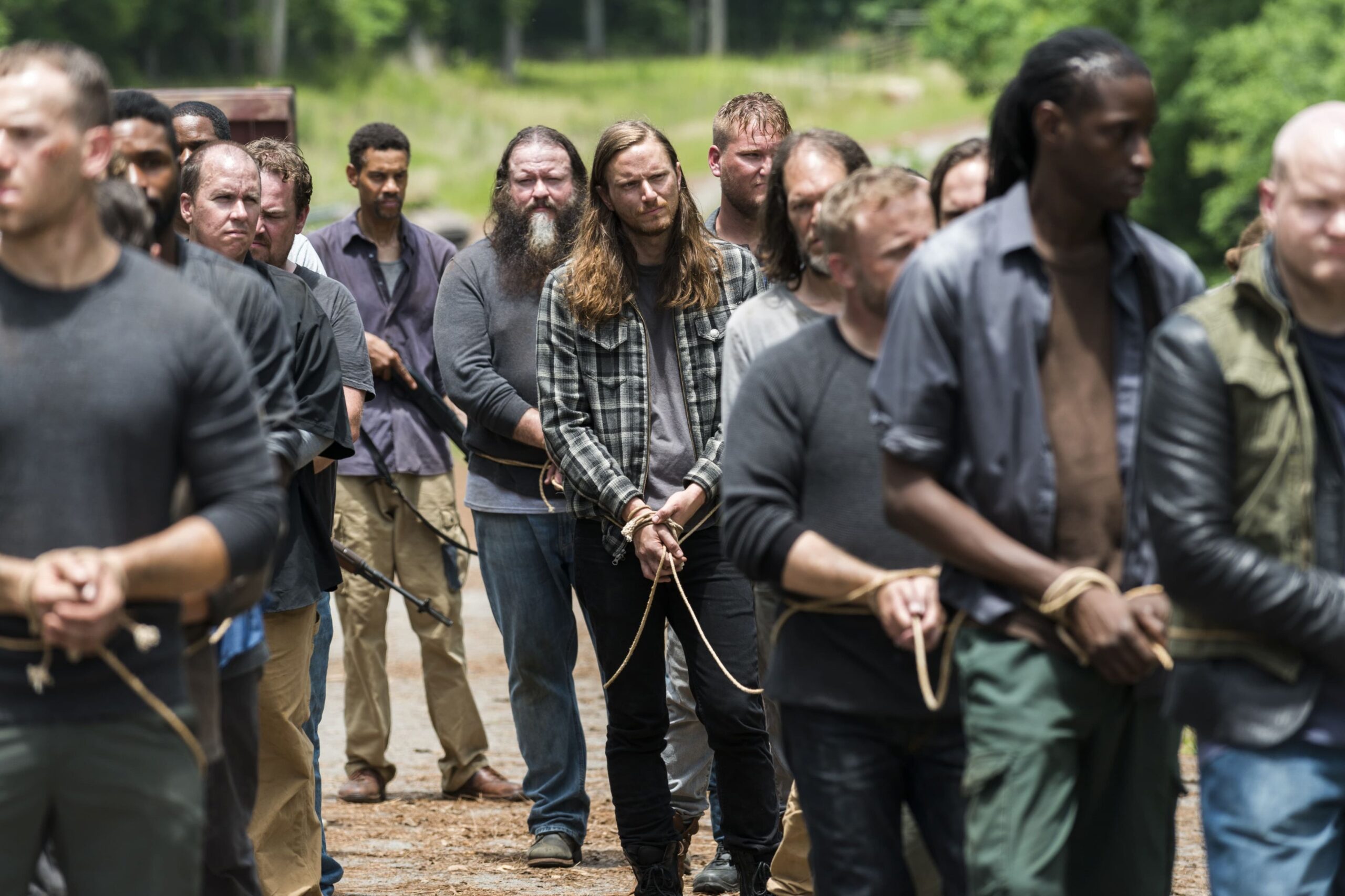 Joshua Mikel: Yeah, it’s unfortunate that this year was coming together to look like it was really going to be a good one career wise, & things all but stopped for 6 months or so. I had just finished an episode of Doom Patrol & a role in the forthcoming film RESPECT (a biopic with Jennifer Hudson as Aretha Franklin) so I was feeling some great momentum. I finished both of those projects, but Doom Patrol unfortunately had to cut their season short an episode like TWD. Thankfully they’re getting a 3rd season, & the story they missed will be picked up there I assume.

In the meantime, I’ve been working hard to find some self worth in other aspects of my life. Been playing regularly with a band featuring two friends I know from the Doom Patrol prop department. I’ve been working on a 1967 Mustang Fastback restoration, & have a pretty nice garden going (all this stuff you can find at my instagram). Auditions just started picking up again, & last week I got to work a short film directed by the TWD script supervisor Amy Lacy. She, of course, crewed it with a ton of TWD crew, so I got to reconnect with a lot of folks. She also got Pollyanna, Lennie, Cooper, Katie Causey (among others) to show face in the short. Was so nice to see everyone.

Joshua Mikel: I’ve met a few Brazilian fans at conventions, & have a few that often comment (kindly) on my instagram posts. Just the most lovely people! I’ve long wanted to make it to Brazil (I always been so fascinated by the rain forest & the diversity found there- & I hear carnival is pretty cool too ?) I truly appreciate all the support & hate y’all have shown Jared & the show. I hope I get to come visit y’all soon, & wishing everyone safety & freedom from anxiety during this particularly wild time the world is experiencing. Viva la Brazil!