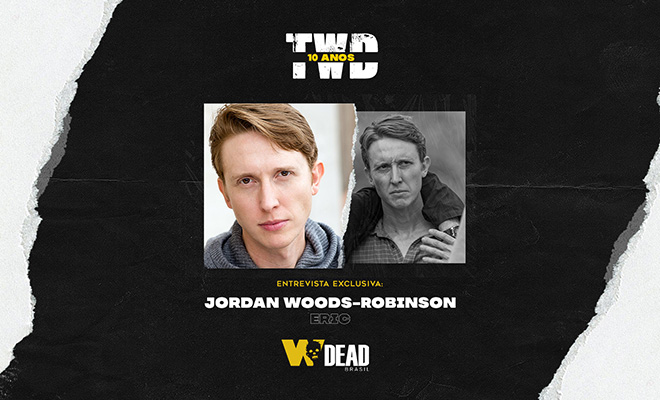 Our guest today is Jordan Woods-Robinson, who played Eric during seasons 5, 6, 7 and 8. The actor told us about working with Ross Marquand (Aaron), about recording Eric’s death, about giving life to an LGBTQ+ character, about his career as a singer and much more!

Without further ado, check out our exclusive interview with Jordan Woods-Robinson:

Jordan Woods-Robinson: I was out of town when I auditioned for the role of Eric on The Walking Dead. I had auditioned a few times before but didn’t know much about the role I was auditioning for, since all of the scripts they send out are fake. I first auditioned in my wife’s grandparents’ kitchen. I waited a week and then heard that they’d like another tape so I sent that in. After a few days of anxiously waiting, I received the great news that I’d booked it! 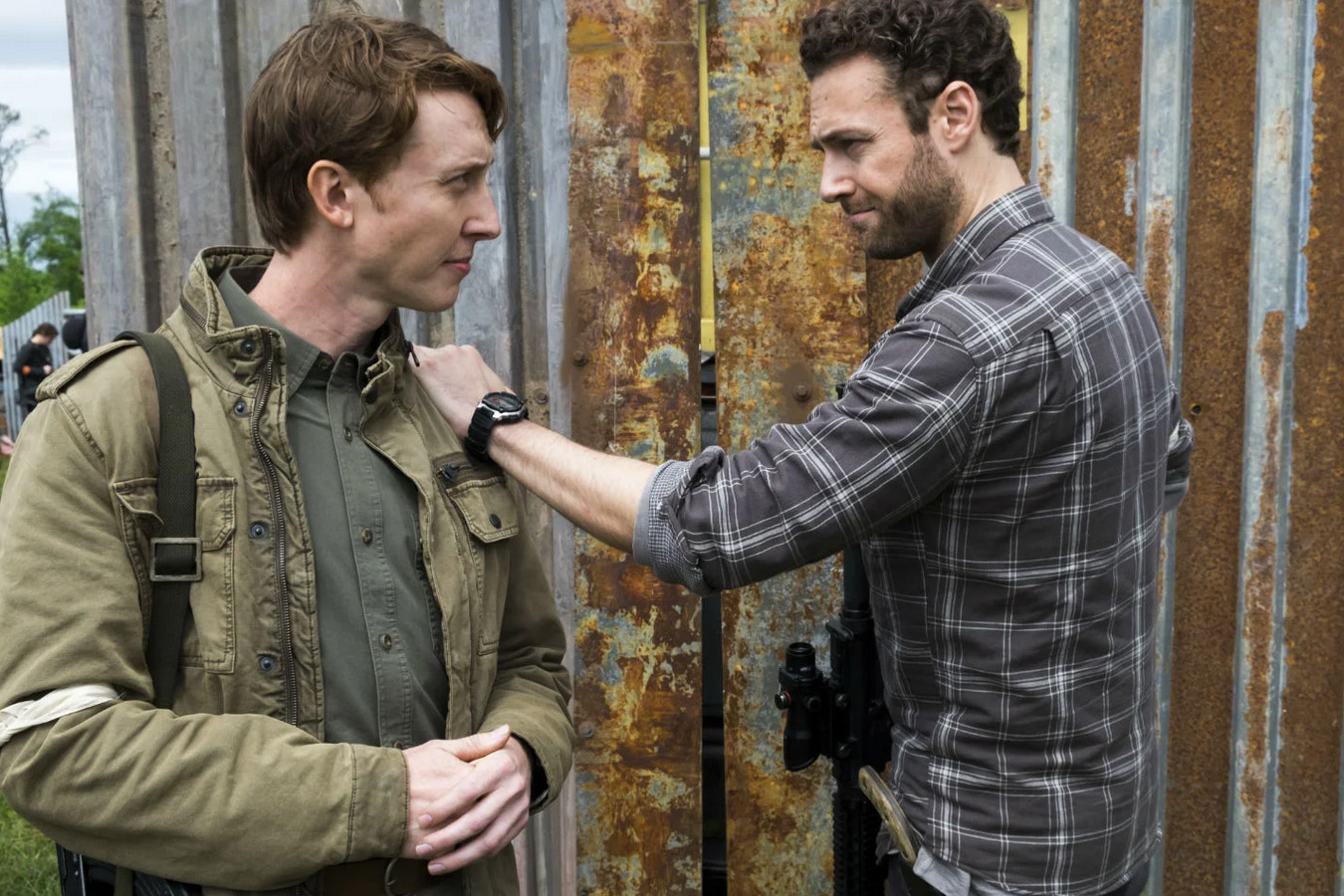 Eric’s still very loved by fans of The Walking Dead, who still mourn his death. How was the experience of giving life to this character? How and when did you know he was going to die?

Jordan Woods-Robinson: Eric was a sensitive soul who loved supporting his partner and I loved getting to bring him to life. Ross was an exceptional scene partner and I’m so lucky to have gotten paired up with such a great guy. On our first night of getting to know each other, we just sat on the balcony at our hotel and shared stories. It turned out we had a lot in common and I still touch base with him often.

I got a call from Scott Gimple in the beginning of Season 8, as we were filming our first episode. I knew it was going to be about Eric dying. Scott spent 45 minutes with me on the phone talking it out, all of the reasons why and how they were going to do it… And I felt incredibly supported and nurtured. I think they gave a lovely, heartfelt goodbye to Eric and I’m so grateful to all of the writers who contributed to Eric’s story.

How did you prepare for Eric’s death scene? How does an actor prepare for something like that? If you could choose another way for Eric to die, what would it be?

Jordan Woods-Robinson: I think Eric died the exact right way. I wouldn’t have wanted anything else. He had spent years staying safe and protecting those in Alexandria, until he realized that the best way to protect them was to fight.

On the day we filmed my death, the cast and crew was incredibly supportive. Ross and I had time with each other. We had space to talk and time to connect. I had a playlist of music I was listening to and I had notes for Aaron in my pocket. Ross and the rest of the crew were incredibly supportive as I lived my last moments and I’m eternally grateful. 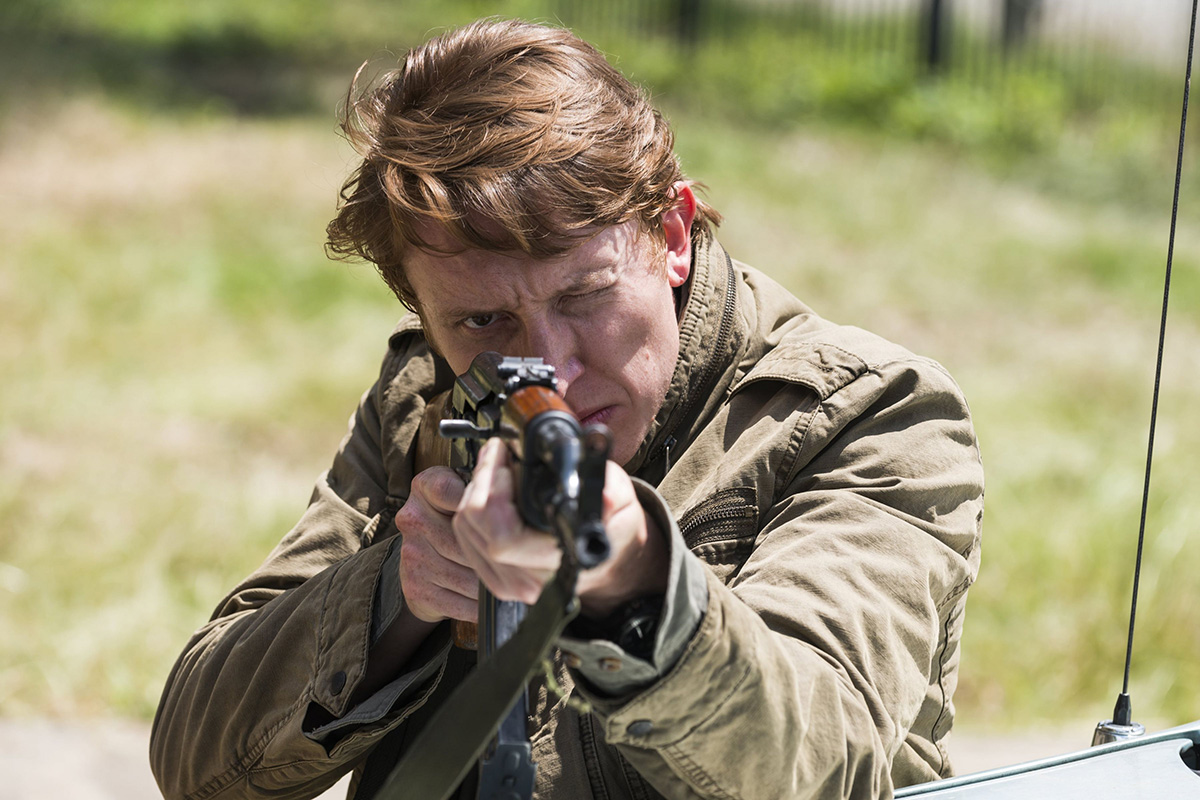 Eric’s part on the show was memorable, amongst other things, for his successful marriage to Aaron. How was it for you to play one of the greatest LGBTQ+ couples on the show?

Jordan Woods-Robinson: I’m so proud to have gotten to support LGBTQ+ rights on one of the world’s largest shows. From the very first moment, Ross and I viewed Eric and Aaron as partners in every sense of the word: we had each other’s backs, we were best friends, we were lovers, we were equals, we knew what the other needed before the other said anything.

I’ve gotten to meet so many members of the LGBTQ+ community thanks to this role and I’m proud to have been a part of that story.

How was your relationship with Ross Marquand on the set? Did you guys had such great chemistry behind the cameras too?

Jordan Woods-Robinson: Oh man. I feel like I’ve already gushed over Ross a lot but he’s just the best guy. He will do anything for anyone, no questions asked. He’s funny, charming, communicative, accessible, and a hell of an actor. We spent lots of time together both on and off camera and Ross is a great, great guy.

An ongoing critic about The Walking Dead is that the show kills all the LGBTQ+ characters. Eric, Tara, Jesus and other important gay characters died through the seasons. What do you think of it? Do you think the show lacks representativeness?

Jordan Woods-Robinson: Before I joined the show, I read that Robert Kirkman would name characters the same name and randomly kill folks off (even if they were a large or influential character) because that was truer to real life… people die without expecting to die and people share the same name sometimes. I’m proud to have gotten to share this representation with the LGBTQ+ community and bring Eric to life for 4 seasons.

Besides being an incredible actor, you’re also part of The Blue Man Group. Tell us how it is to be part of it and how you ended up in this project?

Jordan Woods-Robinson: Yes! Blue Man Group is huge in Brazil! I started Blue Man Group in 2007 in New York City, then Las Vegas, and then Orlando. It was my dream job right out of college and I was extremely fortunate to land a job that would keep me entertained for 13 years.

How do you reconcile your talents as a singer and actor? Do you prefer to work on one of them? What do you think are the advantages and disadvantages of each?

Jordan Woods-Robinson: I’ve been a musician since I was four. I grew up playing violin and had a professional career most of my young life. Then I wanted to study acting so I applied to New York University, where I was fortunate to be accepted.

I’ve learned that, as an artist, putting something on the back burner doesn’t kill it. It just means that, when you come back to it, your passion will be even stronger. Sometimes I’m more focused on music than acting; sometimes, the other way around. As an artist, I don’t want to force creativity. When I’m inspired, I work. And when I’m inspired, I do better work. 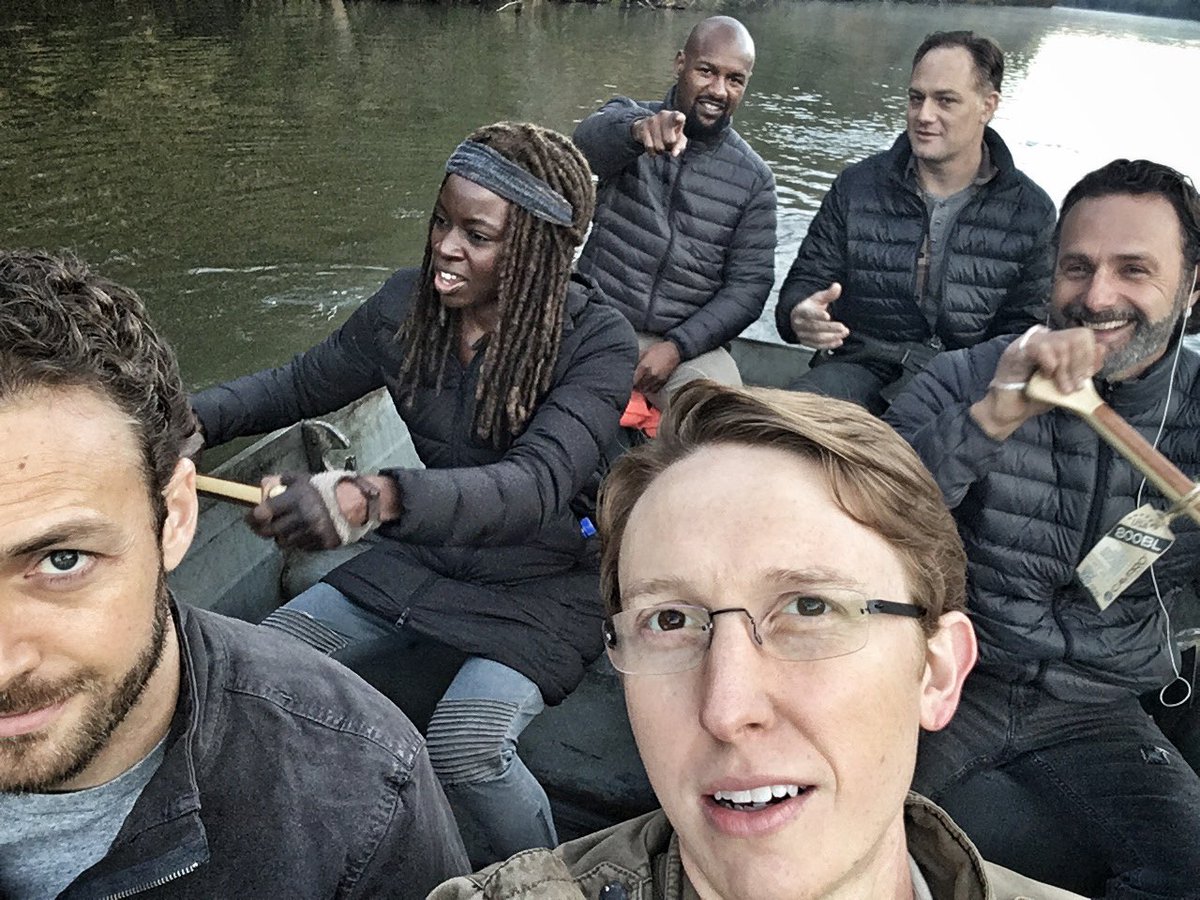 Jordan Woods-Robinson: I think of two episodes that were fun to shoot. I loved my time at the spaghetti dinner. First, I got to eat… always a plus. Secondly, it was a different tone from what the show had seen recently and I really loved working off Ross and Norman. Secondly, I loved the day in Season 7 where a group of us rowed across a river to go find Oceanside. It was Halloween day, the boat was metal and freezing, and we had so many laughs as Andy and Danai tried to figure out how to row us to the other shore.

My most challenging scenes were the fighting episodes in Season 8. It was 100* outside and I was in multiple layers, running across pavement shooting a gun. I wanted to pull a full Andrew Lincoln and not go inside to the air conditioning or even sit down. I stayed outside all day, feeling the heat and the gravity of the situation. I probably sweated off a full 5 pounds. But I also remember sitting with the rest of the cast and being immensely proud of the work we were doing.

Jordan Woods-Robinson: The first person I met on set was Norman Reedus. He gave me a big hug and said “welcome to the family.” Then I met Andy and was blown away by how sweet and charming he is.

My last day on set, I was surrounded by love and support. I was invited to give a speech and I got to share the meaning of a tattoo I have, which his Salvador Dali’s interpretation of Alice in Wonderland. It’s a silhouette of a young girl playing jump rope. To Dali, it was his idea of eternal youth and innocence. I said to the cast that I got it because we are actors, always being asked to reinvent ourselves from project to project and that I did not see it as the end of a role but, rather, the invitation to find a new experience. 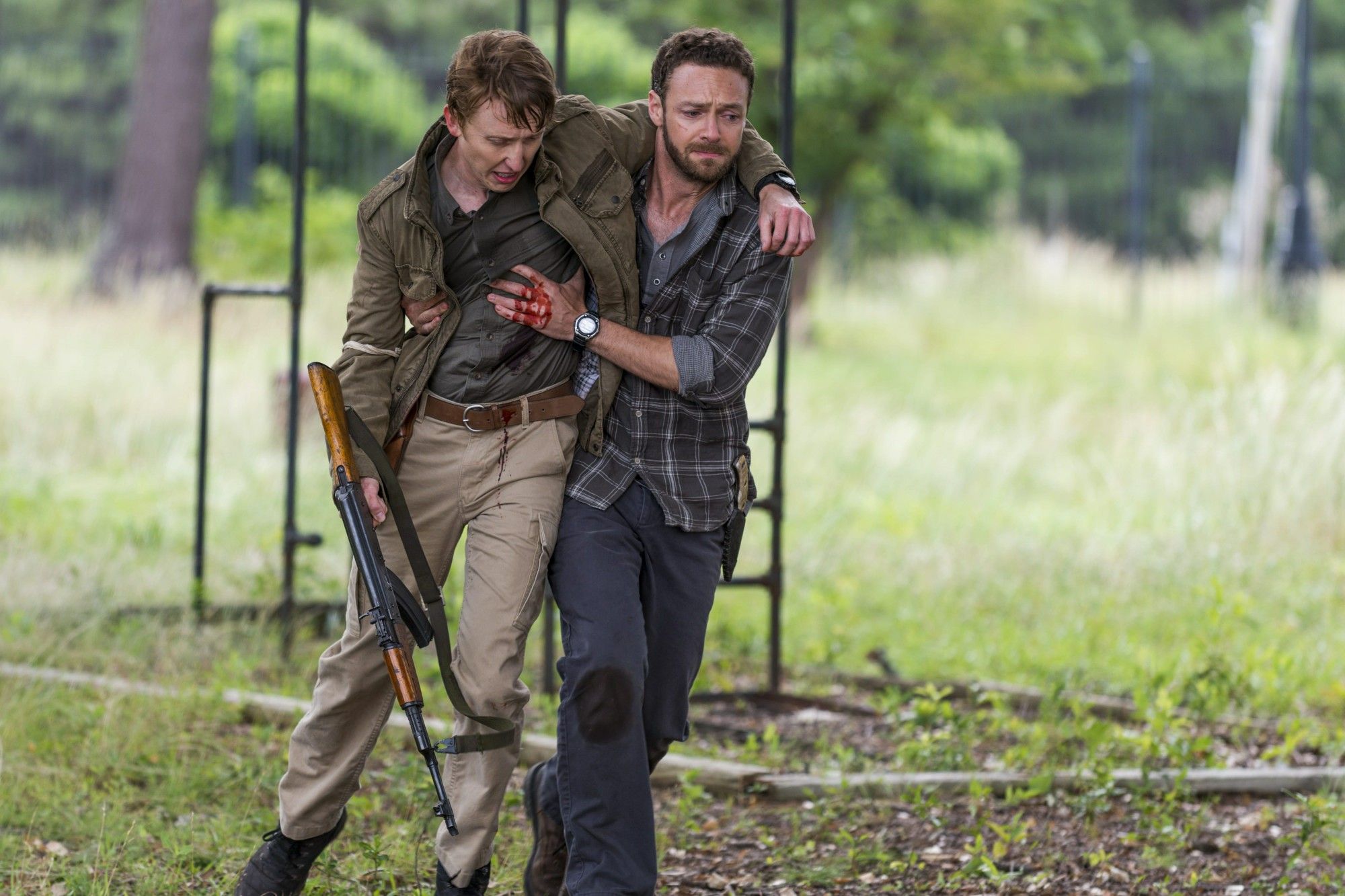 If Eric had survived longer on the show, with which characters would you like him to interact with? Is there any actor you’d like to have worked with more closely during your time on the show?

Jordan Woods-Robinson: I think Eric and Enid would have really hit it off and wish we’d seen more of them together.

Brazil is going through a hard time concerning cultural production, which is sometimes seen as unnecessary. We’ve been asking this to everyone we interview, but you have expertise in both acting and singing: how important do you think cultural production of any kind (music, movies, tv shows, etc.) is for us to make it through the moment we’re facing?

Jordan Woods-Robinson: I don’t know much about what Brazil is going through right now but I firmly believe that acting teaches valuable life lessons: collaboration, communication, reflection… and that studying acting, at any age, will only help a person.

Jordan Woods-Robinson: I’ve had quite a few unfortunate events happen due to the pandemic but I’m very fortunate to have a healthy family and a supportive community.

Jordan Woods-Robinson: To all my Brazilian fans, thank you for being so loyal and so energetic. In Blue Man Group, I’ve gotten to hear so many proud exclamations of “Brazil!” and “Congratulations!” Your energy is beautiful and inspiring. Thank you!