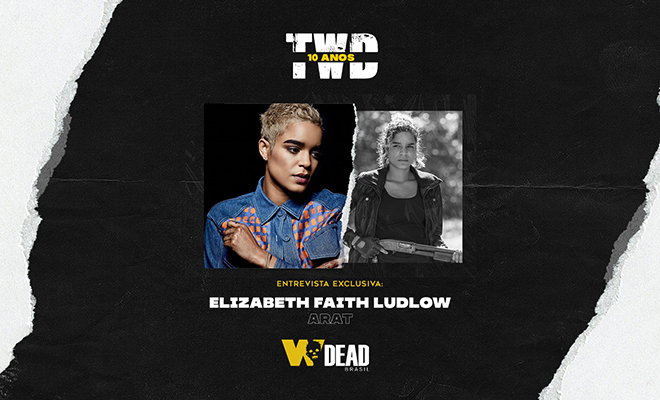 Our guest today is Elizabeth Faith Ludlow, who played Arat in seasons 7, 8 and 9. The actress told us about the importance of The Walking Dead, about shooting the death scenes of Olivia and Arat, about working with Jeffrey Dean Morgan and with whom she’d like to have scenes, about the second season of Another Life and more.

Without further ado, check out our exclusive interview with Elizabeth Faith Ludlow:

First of all, it`s a great privilege to have the chance to talk to you in such an important moment for The Walking Dead. How do you feel being part of it? Can you talk a bit about your audition? Did joining the show change your life in some way?

Elizabeth Faith Ludlow: It was such an honor to be part of such an iconic series. I actually auditioned for the show quite a few times before I booked the role of Arat.
Booking the show changed my life in quite a few ways but overall it allowed me to reach a very wide and very dedicated audience. I had never been a part of something so beloved with such an immense fan base. I still have dedicated fans to this day because of becoming a part of The Walking Dead family. 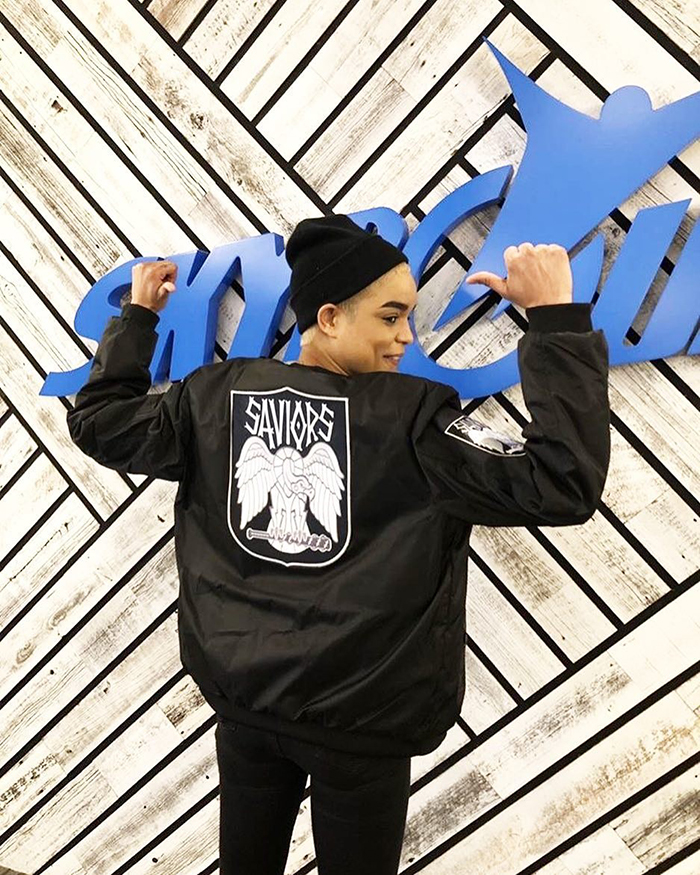 We know nothing about Arat’s past. When you played her, did you come up with some background for her to help you build up the character? Did the writers tell you something to help with this process?

Elizabeth Faith Ludlow: I did create a backstory for Arat and the writers gave me total freedom to bring her to life with my own story. The key to survival in an apocalyptic scenario is community. Arat survived as long as she did because she climbed the ranks within The Savior community and that afforded her food and protection. Without Negan and The Saviors there is no telling if she would have survived on her own.

Can you mention any resemblance between you and Arat?

Elizabeth Faith Ludlow: The resemblance between Arat and I comes from within. Arat is a survivor.I consider myself a survivor in many ways as well.

Your character killed and was killed. How did it feel to record both: killing Olivia and being killed by Cyndie?

Elizabeth Faith Ludlow: Filming the death of Olivia and myself were probably my two favorite days on set. When Arat shoots Olivia in the eye it was the first time Arat showed us why she was Negans right hand. Up until this point she had kind of stayed in the background but that day was so much fun because we got to see just how dangerous Arat could be. The day Cydnie killed Arat was a very emotional day. My three years on the show was finally coming to an end and all of those feelings came out in that scene. It was the first time we got to see the human side of Arat. We got to see her vulnerability and I think that was the moment fans realized that Arat was just another human trying to survive by any means necessary.

If your character was still alive how do you think she’d cope with all the changes? Would she continue to believe the Saviours would, eventually, take the power back or would she join one of the communities against the Whisperers?

Elizabeth Faith Ludlow: If Arat was still alive I do believe she would have joined forces with another group. I would like to believe that she would find a way to stand up for what was right. 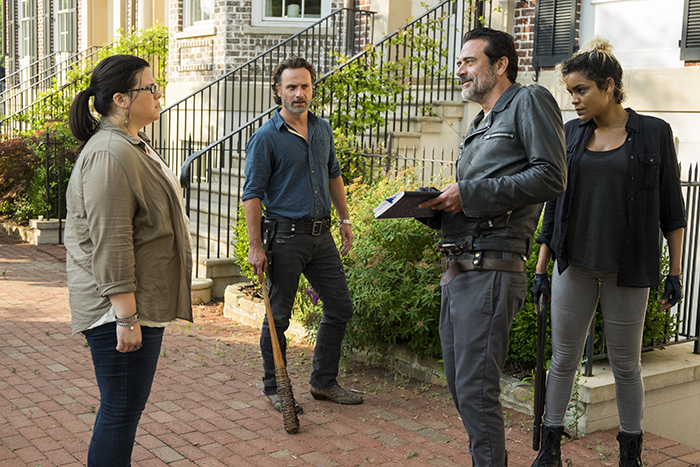 We know The Walking Dead set is super fun and the actors are a great family. How was it for you, how did they welcome you? Can you remember any funny moments behind the cameras to share with us?

Elizabeth Faith Ludlow: Joining The Walking Dead Family was and still is like no other experience I’ve had on a set. Everyone is very welcoming and it creates a real sense of belonging when coming to work. My favorite moments behind the camera were getting to interact with the zombies when they were just hanging out between scenes. It would always make me laugh to just see them on their phones or eating lunch in full zombie gear.

You were regularly on the scene with Jeffrey Dean Morgan. How was it to work with him? Is there any member of the cast you didn’t get to share a scene with?

Elizabeth Faith Ludlow: Working with Jeffrey was so much fun. He is such an amazing actor. I couldn’t imagine anyone else as Negan, I think he embodied the role perfectly. There were quite a few people I never got to share a scene with. I would’ve loved to work alongside Danai at some point!

The Walking Dead always had strong and empowered female characters and Arat was one of them. How was it for you to act as such a powerful woman? How important do you think this is for other women?

Elizabeth Faith Ludlow: I love playing powerful women because women are so powerful. I think it is extremely important to continue portraying women in this light. We are too often portrayed as weak or merely sexual objects and it takes consistent representation to change these false theories. I hope to continue to embody strong female characters on screen so women generations from now will have a better chance at being seen as equals. 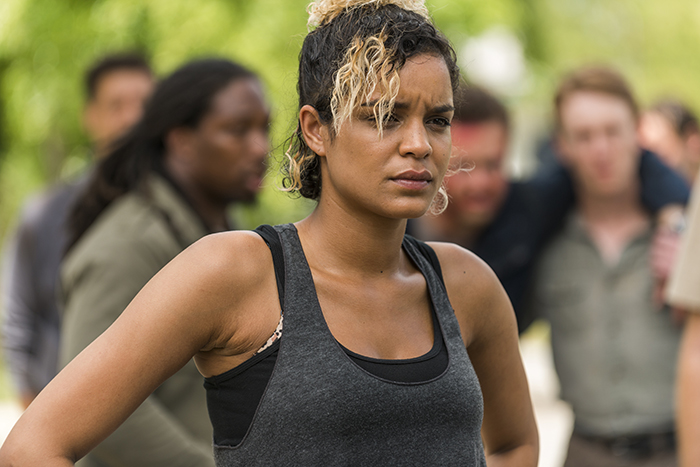 Arat stayed in the Sanctuary after Negan’s fall, helping to rebuild the community. Do you think she changed in some way? Or do you believe the fact that she remained there was a sign she was awaiting Negan’s return for revenge?

Elizabeth Faith Ludlow: I do believe Arat changed in many ways after Negan was imprisoned. She was no longer under his thumb and had the opportunity to become a positive part of society. I think Arat wanted the chance to just live amongst others in peace, I don’t believe she was hellbent on destruction.

Negan is now walking a path towards redemption. Do you think he deserves forgiveness? Do you believe someone who did all he did can really change?

Elizabeth Faith Ludlow: I do believe everyone deserves forgiveness, including Negan. Who am I to say there is no good in Negan? I think if given the opportunity everyone can change.

What are the steps you take before entering the character? Do you have any kind of “ritual” before getting into a scene? How do you prepare?

Elizabeth Faith Ludlow: I have a few different techniques I use to get into my characters but it changes constantly from character to character. No two people are exactly the same so I try to approach each character with that mindset. I wouldn’t say I have a ritual. 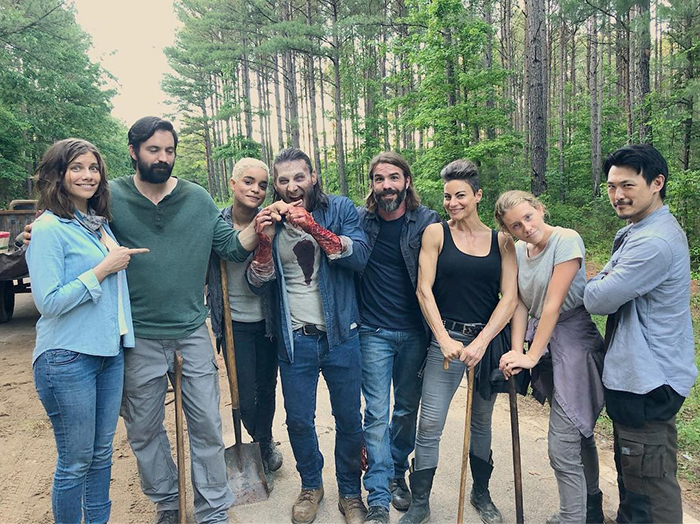 Besides The Walking Dead, you were also a part of Marvel Universe! How was it to be on the set of Guardians of the Galaxy? How long did it take to put on Easik’s make up?

Elizabeth Faith Ludlow: Being on set for Guardians of the Galaxy was awesome. The set was unreal. It took four hours in FX to create the Easik character from Guardians of The Galaxy.

What would you rather face: a walker horde or Godzilla? Why?

Elizabeth Faith Ludlow: I think I would rather face a walker horde and that’s simply based on scale. There is no defeating Godzilla but I could probably make it out of a walker horde.

The pandemic affected everyone and everything in the world and you are currently part of the cast of Netflix’s “Another Life”. Did they come up with a solution to start filming the second season? What can we expect from Cas Isakovic?

Elizabeth Faith Ludlow: Netflix and Another Life started working on a way for us to get back to work the moment we got shut down. We just started filming Season 2 of Another Life. We can expect alot from Cas this season but mainly we will get to see her come into her own and become her own hero. 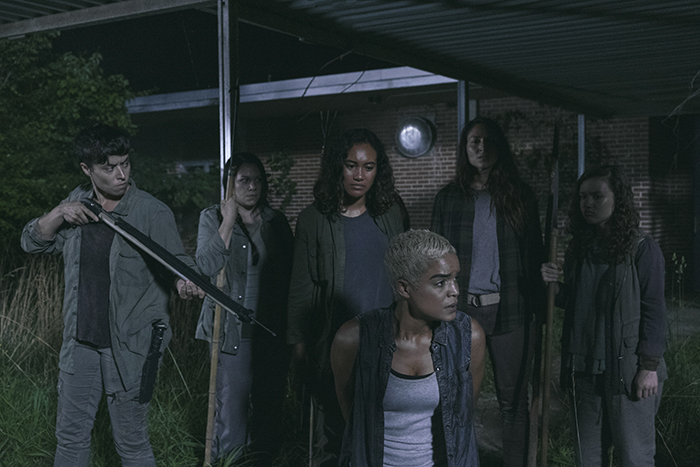 Elizabeth Faith Ludlow: The pandemic did delay a couple projects but those are back up and running now. I just wrapped a new HBO docu series which will come out this October. We are also filming the second season of Another Life. I have been doing my best to stay healthy mentally and physically during this time. Eating clean and exercising have really helped me stay sane. Hopefully things will return to some sort of normal very soon!