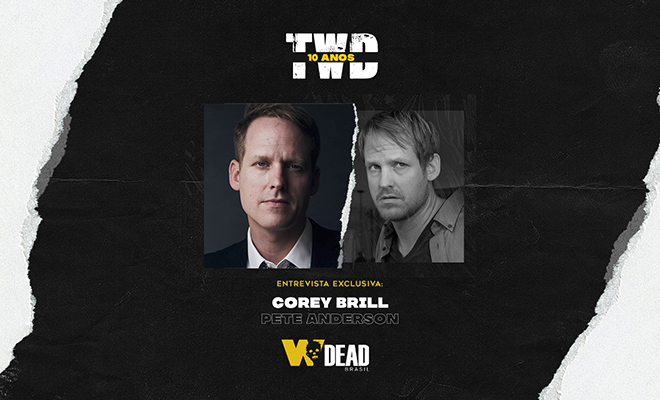 Our guest today is Corey Brill, who played Pete Anderson during season 5. The actor told us about working with Alexandra Breckenrige, about the epic fight scene between Pete and Rick, about the funny moments with the cast when they weren’t shooting, about a new play and much more.

Without further ado, check out our exclusive interview with Corey Brill:

Corey Brill: Oi Walking Dead Brazil! A pleasure. This will be fun to walk my mind back to my (way to short!) time in Alexandria! Let’s see, it came in as a self-tape audition, meaning I’d video myself doing a scene and send it in. Maybe you know, but TWD doesn’t use actual script material so they wrote a scene in which a surgeon with a short fuse is accused of being drunk during an operation. I knew of the show of course, but hadn’t seen it. Once I booked the role I binged and loved it! 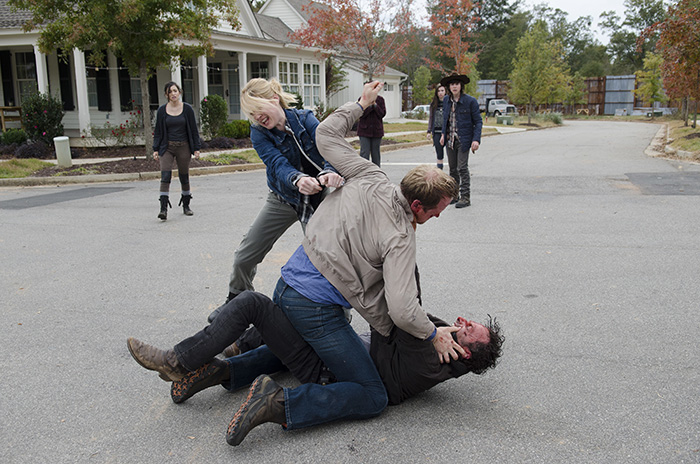 We know nothing about Pete’s past. When you played him, did you come up with some backstory or it wasn’t as important? Did the writers tell you anything about him to help you?

Corey Brill: I do remember some conversations about things that the Andersons might have been through become we meet them but no specifics. He had needed skills in the community, so he was used to some power – but was also clearly damaged.

In the first season, we witnessed an openly abusive relationship between Ed and Carol. In the 5th season, your character was very welcoming and charming at first but then he surprised the audience by psychologically abusing his wife. He was ready to fight anyone who would stand between him and Jessie. How important do you think it is to approach this kind of situation on TV?

Corey Brill: I think its accurate to show that abuse can come in many forms. But the commonality in all is that it’s about power and fear. Not fear on the part of the abused but the abuser, I think. Pete was terrified of so much even before Rick and the gang showed up and then to add the possible loss of his family to a newcomer….it was too much for him.

During our last interview you mentioned how great it was to work with Andrew Lincoln, but we forgot to ask about Alexandra Breckenridge! How was it to work with her in the development of your characters? Do you guys still keep in touch?

Corey Brill: I check out Alexandra on Instagram from time to time – she started her family around the same time our was growing – and she is awesome. I loved working with her – always found her energy so calming. I felt like such a newbie around pros like her but she always made me feel at ease.

We know sometimes scenes get cut in the final edition of an episode. Did any of your scenes ever get cut or did all of Pete’s story was on the screen?

Corey Brill: I think they were all used. I think so anyway!

One of your most remarkable scenes with Rick was the one of the “flying through the window” fight. Can you tell us a bit about how it was to shoot this scene? Did you get any previous training for it? Do you remember any funny moments in the set shooting it?

Corey Brill: Oh this was my favorite two days on set for sure! We shot up through the window smash then finished our brawl on the street the next day. A day or two beforehand Andrew and I went through the basics of what the fight would be – stepping through it with just the director and stunt coordinator.

This was exactly the kind of fight scene I’d always wanted to be in: ugly, bloody and fierce! We each managed to accidentally hit each other at least once – I think in that kind of close fight that happens – and I loved every minute. Just before Mike would call action we’d be growling into each others ears “fuck you fuck you fuck you.” Believe it or not that was a perfect work environment.

Before dying, Pete ended up killing Reg with Michonne’s katana. How does an actor prepare for such a hard moment like that? And how did you feel, playing such a rough scene?

Corey Brill: Coming into that little courtyard each take meant getting into a place of blind, unthinking rage. Turns out for me that meant listening to some very intense ugly music (Barry Adamson’s track “Dirty Barry” if I remember right”) to keep myself in a certain headspace. And push-ups. Tovah would do 25 pushups before some takes and boy did I steal that. Gets your heart rate up just enough to feel a rush but not so much that you’re out of breath. Little Tovah-tip there. 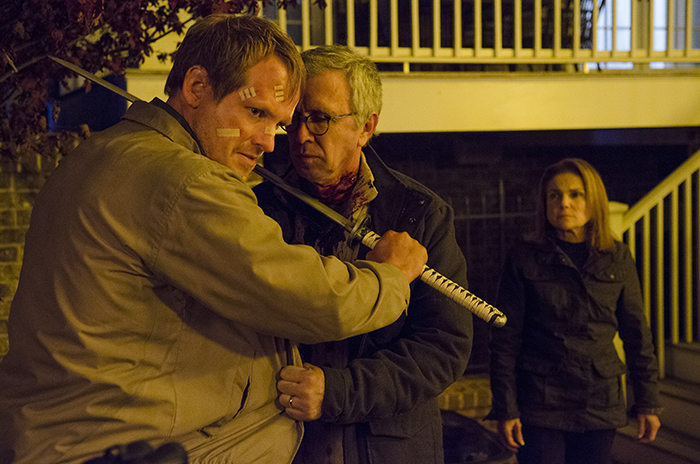 Corey Brill: Oh yeah, again, the fight was both the most fun and the most challenging. I had contacts in when we were shooting the outside portion and they got so much fake blood on them that they permanently stained! There’s something so great about scenes like that. You can tell that even the crew is excited. And that’s amazing cause they’ve seen everything.

Corey Brill: My first day on set I was taken over to where Andy and the crew would be shooting next. The scene when Pete address Rick from the shadows. (Pete acts like dick, I guess you could say? On a porch? Forget I said that:) Anyway Andy came over and sat with me as they were setting up the shot and he set the tone for the rest of my experience. Made me feel so welcomed and encouraged me to take as much time as wanted in scenes. That’s crazy rare and generous. He’s one of the best.

If Pete had survived longer on the show, with which characters would you like him to interact with? Is there any actor you’d like to have worked with more closely during your time on the show?

Corey Brill: Oh if only he’d survived longer. I remember reading Carol’s line “you’re going to have to kill him” (meaning me) and suggesting to Scott Gimple a alternative line: “you’re have to have to really get to know him. Over a long period of time.” He didn’t bite. I’d have loved to had more chances to work to Steven and Lauren (we had some fun times off set, I remember) and it’s a shame Pete and Daryl never got to interact much.

Corey Brill: We had a newborn come into our lives right around the time a certain baseball bat showed up and killed some old friends of mine…I think that was the last episode I’ve seen. Maybe now that they’re a little older I can get back in to zombie gore.

How should it end? With as much heart and skillful storytelling as it can muster. I bet they’ll pull it off.

What did you like to do around Senoia/Georgia when you had a day off? Did you go out with other cast members? What would you do with your free time when you were shooting The Walking Dead? Is there any funny story you’d like to share with us?

Corey Brill: There’s a bar in Senoia that had a good trivia night. One of my favorite memories was going with Alexandra, Ross Marquand, Michael Traynor, Daniel Bonjour and Austin Nichols and having a blast. We called ourselves Team Alexandria (nobody knew what who we were of course) and I can’t remember if we won. I think we did? But that may just be wishful remembering!

Talking about a zombie apocalypse… What would Corey have in his survival kit? Choose 5 indispensable items! Would you be more of a community survivor or a lone wolf?

Corey Brill: I would want to be with a couple of others but that’s it. Let’s see…I’m gonna assume that all the practical things have been taken care of so I’ll add: very tall stilts, one of those shark-proof chainmail outfits, one of those little portable hand held fans, beer and an armored Humvee.) 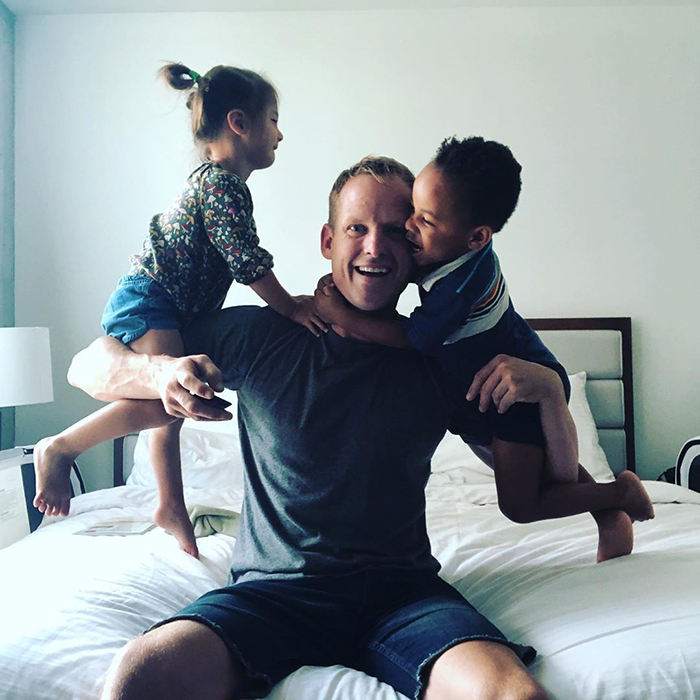 Corey Brill: Thanks for asking . I was about to begin work on a play by Tom Stoppard called Arcadia – have waited years to do it and I guess I’ll have to wait some years more. The pandemic has been hard on all actors of course, but theatre especially is in a tough spot. Many theatre actors only lhave health insure because they work a certain number of weeks during part of the year. Many actors here are going to have a hard time, no way around it. I have enjoyed the extra time with my family – that’s been great for my mental health. That and as much time in the woods as I can grab!

Corey Brill: I remember meeting Brazilian fans on Twitter right away and thinking wow – these guys are amazing! It’s so cool to be on a show that has a global audience. I hope someday I can travel down there and meet some fans in person! Seriously. Can we make that happen? I hope everyone down there to be safe and healthy and as happy as these crazy times will permit. Love will win. Keep walking.