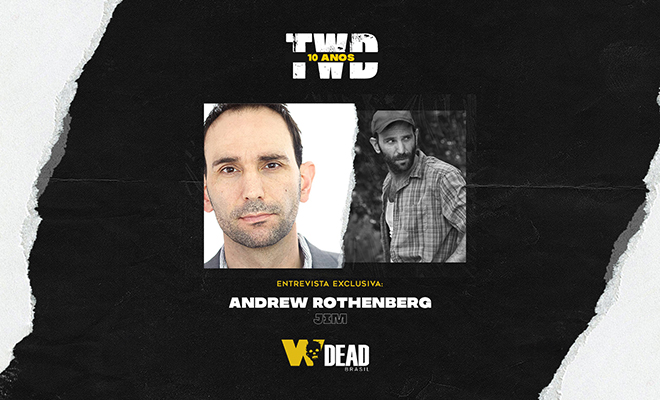 Our guest today is Andrew Rothenberg, who played Jim during season 1. The actor told us about his search for inspiration in the comic books of The Walking Dead to create his character, about the backstage of the shootings, about the union of the cast, about working in Mob City and much more!

Without further ado, check out our exclusive interview with Andrew Rothenberg:

It’s an honor for us to talk to you in such a special moment for The Walking Dead. It’s not just any show that get to its 10th anniversary. Can you start by telling us how was the audition for the show? How did you hear about the part? Did you know the show beforehand?

Andrew Rothenberg: It’s an honor to be “here” Thank you. The audition came up like usual, a call from my agent. I knew nothing about TWD but some of my friends were very familiar with the graphic novel and they freaked out that I had an audition. I did come in early and do some reading of the comic to get familiar with it an hour before the audition. If I remember correctly I did come back for a second audition a week later but didn’t hear anything after that. I had figured that it was given to someone else after another week or two and actually, I later heard that it was. Fortunately for me the network didn’t approve the other actor and I was given the part. I was also brought in to read for Darrel, Ive been known to play a bad boy or two in my time. I feel like the casting all worked out for the best. 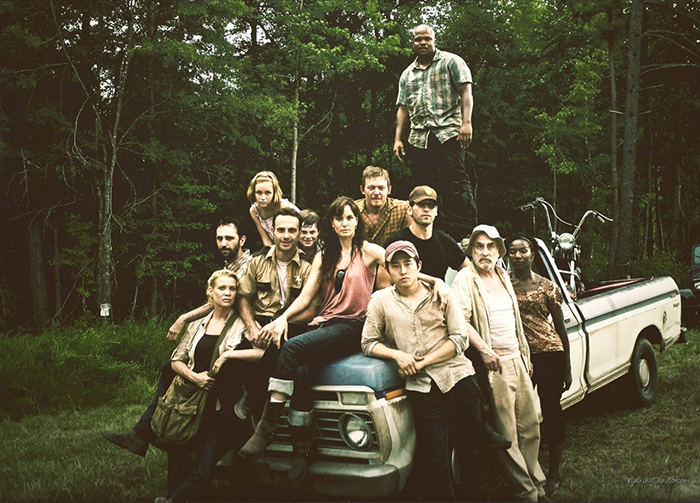 Jim had the same fate as his comic’s counterpart, changing only where he was bitten. Did you read the comics to know more about the character or did you keep it on the scripts? And you, as a fan, would rather see the story being told exactly the same way as in the comics or do you like to see some new stories mixed in?

Andrew Rothenberg: I used the comics to reference the mood and tone. I often use images to help me get a feel for a character and his world. The comics helped me with that greatly. As far has “holding to the original story” goes… Each form of entertainment and story telling should follow the path that best suits it. What I mean is that the way a book tells a story is very different from how a song or a film tells a story. You can’t just take one medium and transfer it to another without expecting it to take some unexpected turns to satisfy that audience. When a piece of writing is transferred to film or TV and its very close to the written version, and it’s good, it’s quite a triumph, but not a requirement. I personally love when I see a story I am very familiar with get messed with or turned on it’s head, as long as it’s done well. I think TWD did it very well.

The first season of The Walking Dead is full of iconic moments, but one of my favourites is the walker invasion on the camp. Do you remember how it was to record those scenes? Do you have any funny moments from behind the cameras to share with us?

Andrew Rothenberg: We were quite a tight group by the time we got to that scene. To be honest, the journey of the actors trust and friendships grew perfectly with telling of the story. As in the story, most of us were strangers when we met and over the few short months we worked together, we bonded and became great trusted friends. When we arrived at the campfire attack scene we were ready for the test. We shot the story telling part of the campfire scene first then moved to the attack. It was a long night, maybe more than one but I think we might have done it all in one night. I remember certain cast members who shall remain unnamed were genuinely freaked out by the zombies. Me, I was not. 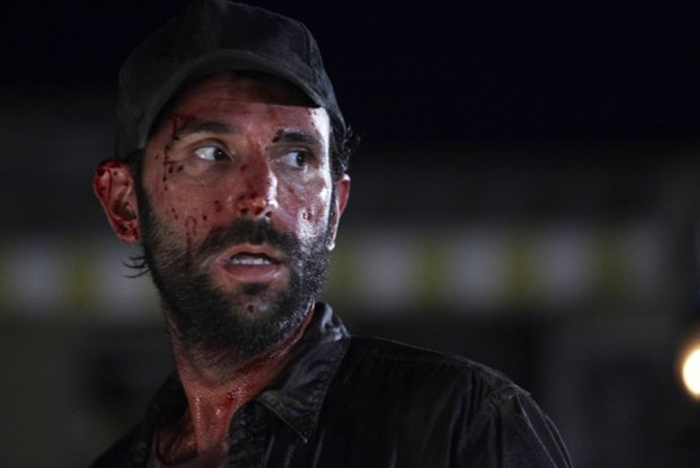 The Walking Dead and our website are turning 10 this year, as we started together in 2010. Did you think the show would be so successful? Being part of it, even if just the first season, gave you new opportunities? How do you see the impact of The Walking Dead in your personal and professional life?

Andrew Rothenberg: You never know how big something will get. We’ve all seen or worked on shows that we thought were AMAZING that just didn’t take. I think some folks thought it would be big but nobody knew it would get as big as it did. The show and my part in it, though small as it was, for sure changed the path of my career and affected…effected(?) my life. To be honest, aside from the boost it gave my career, the best part was getting to travel to London and Europe, more than once, for zombie conventions. I always wanted to come to South America but that never came up. I’m still game if someone wants to bring me down there when it’s safe again…! I am forever grateful for what TWD has done for my life.

Jim had a premonition about the attack on the camp and got ahead of it by digging graves. Did you ever have such a powerful dream that ended up becoming reality?

Andrew Rothenberg: No. Haha. That one was easy.

Jim preferred to come back as a walker to meet up with his family, and we would have loved to see his walker version. Would you choose the same if you were in his place? Or would you rather end your suffering as quickly as possible?

Andrew Rothenberg: I have a chronic case of FOMO so I’d probably do everything possible to be around to see what’s next, even as a zombie. 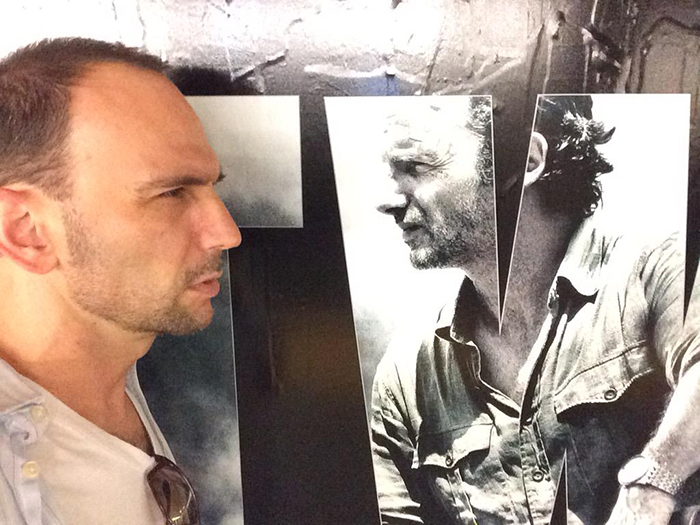 Andrew Rothenberg: This is hard. I enjoyed so many parts of shooting this show. Honestly, the whole shoot was the most fun. Seriously. The people, and I mean from the actors to the every person on the crew to the producers and directors. Such a family of people. That doesn’t happen often. For me it’s fun when you are doing the best work you can do and that’s how I felt every day on that set. Now I am not saying the I did the best work, I am saying that everyone was working to make something great, and that is beyond fun, it’s why I do this.

Andrew Rothenberg: The first day, I flew to Atlanta and was brought to set. I met Frank Darabont and had a chat with him. I saw Andrew Lincoln and watched a scene being filmed. Later that day there was a gathering at Andrew’s house with the cast and crew. He was so nice and friendly. He introduced me to his son. He said “this is my son Ahtha” I thought hm, that’s an odd name. AHTHA. It was then that I realized for the first time that he was British and his son’s name was Arthur. The last memory I have was at the wrap party. I had spent over two months being the quiet, depressed, Jim. At the party I danced and let loose.Everyone was looking at me like “who’s that?” 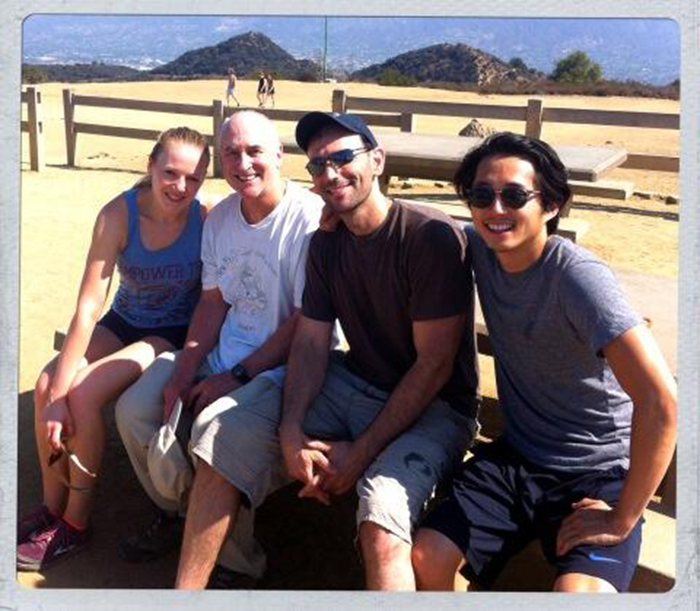 Jim had survived longer on the show, with which characters would you like him to interact with? Is there any actor you’d like to have worked with more closely during your time on the show?

Andrew Rothenberg: Dale, Jeffrey DeMunn, and and Glen, Steven Yeun. The two of them were the most fun and would have been the most fun to keep playing with.

Andrew Rothenberg: Malcolm from True Blood. Come on! What if there was a vampire on any side of this show!!!!

Andrew Rothenberg: Jim shows up, he is immune to the zombie thing and he restarts humanity. Can that happen? I’m a few seasons behind

Even after his death Jim came back to haunt Rick in a special appearance during the third season and we were really happy to have you back – even if just your voice. How was it to come back? Did you go to the set or did you just record the audio remotely? How did you get the invitation?

Andrew Rothenberg: It’s always an early Christmas present when you get a call with a job that you were not expecting. This one was the best. I recorded it remotely, no reason to go to set. I would do anything for The Walking Dead Family. 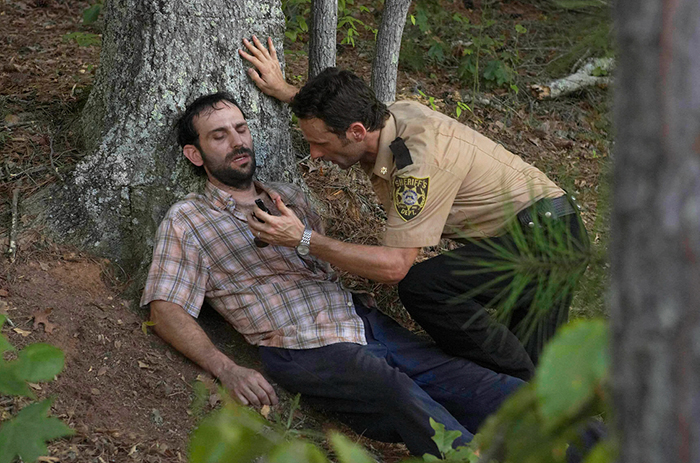 You worked with Frank Darabont and other members of The Walking Dead cast again in Mob City. Can you talk a little about how it was to work with Frank in both projects?

Andrew Rothenberg: A dream. I had so much fun working on that and I didn’t have to be in apocalypse clothes!!! I was truly honored to get to work with Jeffrey, John Bernthal, and Frank again not to mention the rest of the folks on that show. I was sad when it didn’t get to continue but as I said, you never know when a show will take. I didn’t work with Frank on TWD as much as Mob City. He’s a man who knows what he wants and I respect that a lot.

Andrew Rothenberg: I had just finished a part on the new season of FARGO. I was so glad I finished my part just before lockdown but the premier was postponed. I am excited to see it in a few weeks. I have been enjoying the slower pace. I live in NY and it was shocking to have it all come to a screeching halt. I think we all needed it though I have been fortunate in that my family and friends are all heathy.

Andrew Rothenberg: I was just telling someone the other day, “Brazil is the biggest fan base for this show. They are a big reason why it’s so big!” I am so grateful for Brazil and all of the fans of TWD.