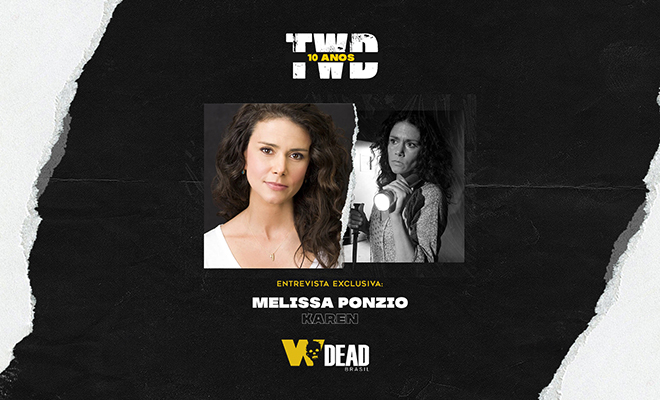 Our guest today is Melissa Ponzio, who played Karen during seasons 3 and 4. The actress told us about Karen having been Carol’s first big victim, about being a romantic couple with Chad L. Coleman (Tyreese), about who chose her character’s name, about the beautiful reunion she had with the cast of Teen Wolf and much more!

Without further ado, check out our exclusive interview with Melissa Ponzio:

Melissa Ponzio: It’s a pleasure to talk with you, thanks for having me… Yes! 10 years is a huge milestone for any show, not all can claim such an accomplishment It’s a testimate to the unbelievable fan base for TWD and the amazing cast & crew who have worked so hard to tell such compelling stories within such a compelling universe.

Much like most auditions, I was called thru my managers, but to GET the call from such a show was a thrill in itself. When I got the part, I had no idea if I would be there for one day or one episode or what it would be. I’m so grateful for my time as Karen on the show, it’s a career highlight to have worked with so many wonderful people. 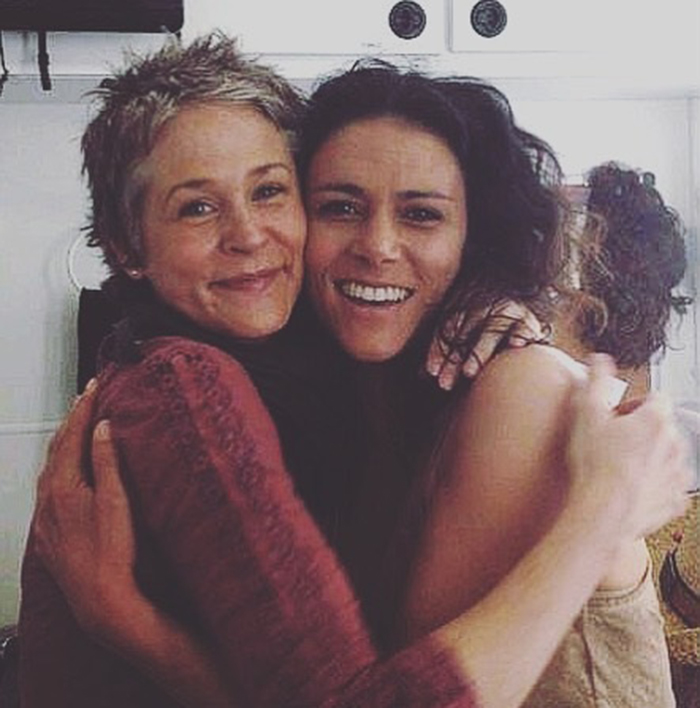 Karen was in The Walking Dead during seasons three and four, in the prison, but ended up dead by a virus that infected the survivors. What did you think about her time on the show? How and when did you know she was going to die?

Melissa Ponzio: The virus didn’t get her… Karen was Carol’s first victim!!! In Carol’s mind, I believe, she thought she was protecting everyone by taking Karen out, it was total survival mentality…but such a love loss for Tyreese and the rest of the gang. I cherish my time on the show, my relationships with fellow castmates and crew. It was very special to be a small part of TWD and it’s impact on so many people…

I had to keep Karen’s demise a secret for a loooooong time, obviously everyone on set knew pretty quick into shooting season 4 what was going to happen…but it had to happen to raise the emotional stakes for the group at that time in the story. It was Karen’s time to go, you can’t fight it, you just have to embrace it.

We also remember Karen as one of the Governor’s guards in Woodbury, who is later welcomed by Rick’s group. How was it for you to transition to the “good” side? In which set did you have more fun shooting episodes: under the sky in Woodbury or behind bars in the prison?

Melissa Ponzio: Don’t make me pick a side, that’s not fair!! 🙂 But honestly, it was the best of both worlds…to be considered one of the bad guys and then to have redemption is the ultimate story arc for an actor. I loved it. It was unexpected and fun to play.

Melissa Ponzio: Every day seemed to have it’s challenges, all good ones. You are working on the number one show in the world, with the top people in their field, actors who know their characters inside and out…so when you are working, you have to work at an extremely high level. And to work in the summertime in Atlanta is an environmental challenge, so hot Hot HOT! But no complaints, we were all there to make the best show possible. 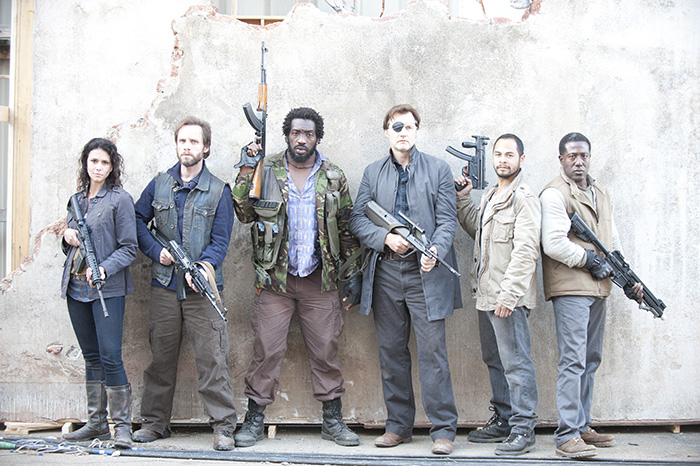 Melissa Ponzio: My first day was very exciting. Working in Atlanta for so long, I already knew a lot of the crew, so it was like walking into a reunion of sorts. I will always be so grateful to Laurie Holden (Andrea) because she took me in and was so warm and welcoming. She said she felt like her character needed a friend in Woodbury, she even gave my character the name Karen! My last day, well, bitter sweet. Everyone was very kind, it felt like you were leaving a party that you never wanted to leave. But you have to go on to other shows, other stories…

The Walking Dead always had strong and powerful female characters and Karen was one of them. How was it to you to make up and play such a strong character? How important do you think it is for other women to see characters like that on TV?

Karen and Tyreese ended up being in a relationship on the show. How was it to work with Chad L Coleman? Did you know him before The Walking Dead?

Melissa Ponzio: Chad and I worked together a little bit during season 3, obviously more season 4. We had a short time to show the audience that this was real, a real loving couple in the apocalypse, a true commitment…we wanted our story to matter when it was taken from us. So we worked fast to get there. 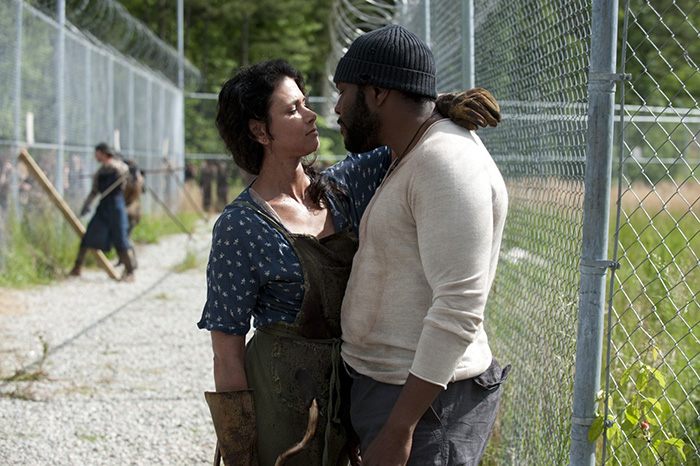 If Karen had survived longer on the show, with which characters would you like her to interact with? Is there any actor you’d like to have worked with more closely during your time on the show?

Melissa Ponzio: Good question… there has been a good mixing of who works with who on TWD, so if Karen had stayed longer, there is no doubt more friendships would have been explored onscreen. Hard to say what the story could have been 🙂

Melissa Ponzio: Bloody. It will end bloody with a lot of heart.

Besides Karen, you also played Melissa McCall in Teen Wolf and Daphne in The Vampire Diaries. Can we say you were born to play characters from fantastic worlds? After all, vampires, werewolves and zombies were part of your trajectory so far. What are the similarities between those three shows? Were you able to use your experience from one show on the other?

Melissa Ponzio: Thank you so much, it’s been fantastic to play in such fantastic worlds! The one thing that runs thru all these shows is that you have to believe, you have to believe what you are doing within the universe of the show, committed to everything that is around you…Smoke monster? yes! You can die 10,000 times? Yes! No one ever eats a meal together? YES!!! I’m kidding with that one, but you have to believe in the world that has been created for the characters.

Melissa Ponzio: I think I would stick with Karen as my character…she survived a good while, was pretty good with a gun and not so bad with finding love during a very stressful time 🙂 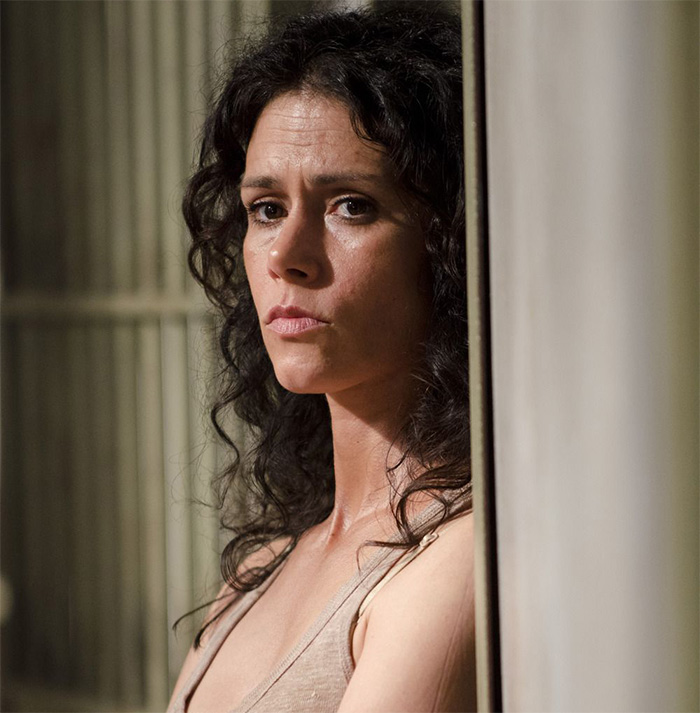 We got to talk about Chicago Fire and the wonderful work you’re doing as Donna. How has this adventure been for you in the last 6 years? And what can we expect from your character’s story in the 9th season?

Melissa Ponzio: Call Out Chicago Fire Family!!! It’s been an honor and a joy to work on Chicago Fire. Another warm and welcoming cast and crew. Donna was first thought just to stay for a couple of shows…but look how that has changed! All from season 2!! I’m looking forward to bringing you more of The Boden’s in Season 9, it’s been an amazing ride to say the least…You will have to tune in to see what happens next!

You recently got reunited with the cast of Teen Wolf. How was it to see everyone again? Do you still keep in touch with any of them?

Melissa Ponzio: What a treat! When MTV said that Teen Wolf was going to kick off their Reunion Specials I think we were all super excited to see and talk with each other, even if just on the screen. I keep in touch with a lot of cast and crew mates. Sometimes it’s just a quick shout out over social media, sometimes it’s over a meal…We spent a lot of time together, 100 episodes! Such a special time in all of our lives.

Melissa Ponzio: My partner Kenny and I have kept busy with house projects and making each other laugh every day. Lots of home cooked meals and long walks at night…sounds simple, but that’s how we’ve been taking care of each other. I try to talk with family every day too. It’s been very important to all of us to keep intouch, especially if we can’t be with each other.

Melissa Ponzio: To all who love The Walking Dead… Thank you so much for your love and support for 10 years! We couldn’t have told this story without you. My deepest appreciation for your continued passion for the cast and crew! My best to you always!!!