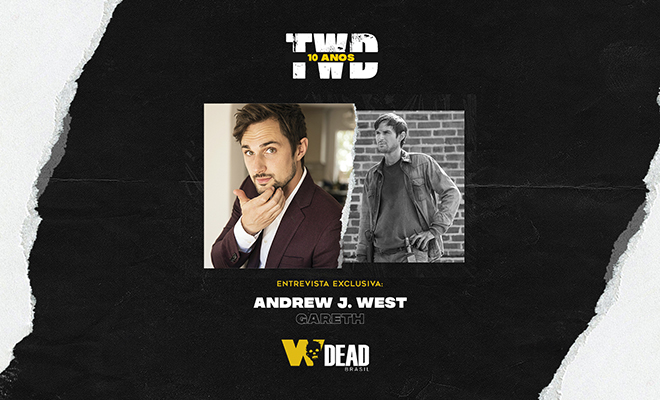 Our guest today is Andrew J. West, who played Gareth in season 4 and 5. The actor told us a little about his participation in the show, about the intensity of the scenes, about the creative decisions, about Once Upon A Time and much more!

Without further ado, check out our exclusive interview with Andrew J. West:

First of all, it’s so nice to talk to you again, it’s been a while since our first interview. How does it feel to be part of such a big project as The Walking Dead? And what do you miss most from your time on the show?

Andrew J. West: So great to talk to you again too! The Walking Dead will always be a standout moment in my career. It’s the first time I ever worked on a massive hit show, first time I portrayed a character from a comic book, first time I ate a guy’s leg on screen, (probably the only time for that one, ?). It was just such a unique experience and I’ll always treasure it.

I miss the freedom and the sense of play we had on that show. I showed up to work, they smeared dirt on my face, handed me a gun and sent me out into the woods to play. It was my childhood dream come true. 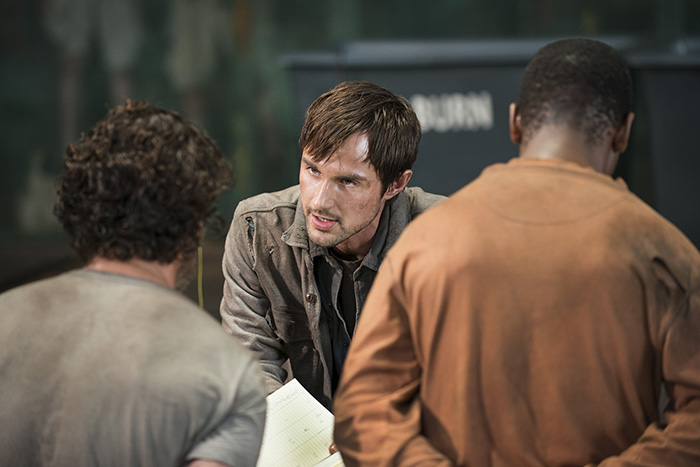 We know nothing about Gareth’s past life, but during the zombie apocalypse he suffered a great deal on the hands of the people who invaded Terminus and hurt its residents. Do you think it justifies him becoming the villain he hated so much?

Andrew J. West: It definitely doesn’t justify his actions, but what I like about his storyline is that we see how he became what he became. There is a reason for his madness. It’s not justified, but you can have an intellectual understanding of his actions if not a moral understanding of them. That’s what I found so intriguing about the character.

How did you react when you first knew you were going to play a villain? Did you want to be on the show before getting the part or it just happened?

Andrew J. West: I was so thrilled when I found out who I’d be playing. I had no idea until I flew to Atlanta and had already done wardrobe fittings. I was very aware of the show, but never necessarily thought that I’d get the opportunity to work on it. When I did get that opportunity, I was up for playing any character they wanted, but when I found out who I’d be be, I couldn’t have been happier. He was just such a well-written, memorable character. I knew his arc would be a good one.

Shooting a death scene must be hard, and your character’s death was particularly hard, since Gareth even pleaded for his life. Can you tell us a bit about how it felt and how you prepared for it?

Andrew J. West: That scene was extremely intense. We were in a church in the middle of the woods, in the middle of the night. And my character is killed by Rick of course, who happens to be played by one of the most committed actors I’ve ever worked with. Andy Lincoln was fired up and the intensity level was at a ten.

For me, there’s no real preparation that will guarantee that you’ll get where you need to be, you just have to actually plead for your life in a situation like that. Working with Andy definitely made it easier. Looking into his eyes during that scene was terrifying. 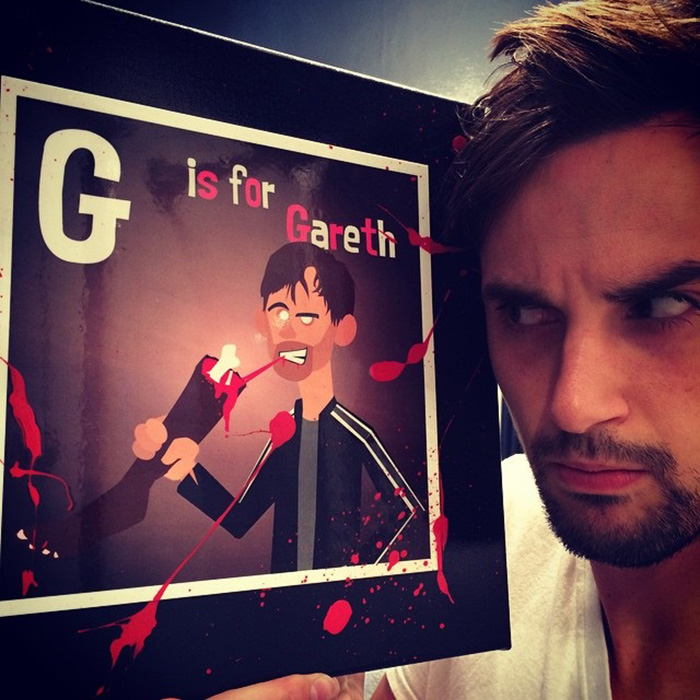 Do you think that if Gareth would seek revenge if he had been forgiven and survived, or would he just look for a new start?

Andrew J. West: I saw him as an opportunist above all else so I don’t think that revenge would have driven him, but since Rick and his group seemed to be the only other people around, I do think he would have attacked them again.

Andrew J. West: I definitely tend to be pragmatic and dispassionate when dealing with a lot of things. I definitely wouldn’t consider myself as overly emotional. Gareth was the same way.

Andrew J. West: I was just so overwhelmed on my first day, I was trying to play it cool as I met all the other actors and then make sure that I did a good job. But I remember Andy Lincoln being so gracious and so welcoming. He immediately made me feel at home.

My character died at the same time as Bob so I kind of piggy-backed on Lawrence Gilliard’s farewell. We had a cast dinner to send off Lawrence and I kinda got an honorable mention at the same time. Lawrence was obviously such a bigger part of the show, and I thought it was really gracious of the producers to include me in any sort of farewell since I was only on the show for a short time. But it was all such a wonderful experience. 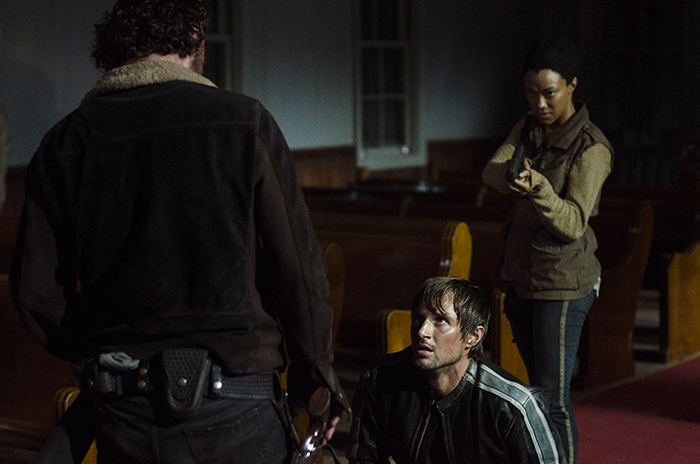 We know sometimes scenes get cut in the final edition of an episode. Did any of your scenes ever get cut or did all of Gareth’s story was on the screen?

Andrew J. West: I think all of my scenes made the cut but my monologue at the beginning of the third episode of season 5 was shortened. And some of the lines that were cut were used very wisely to create a misdirect in the season teaser. That may have all been by design, but luckily nothing juicy that I filmed was left on the cutting room floor.

Gareth was based on Chris from The Walking Dead comics, which has one of the most iconic arcs in the story. Do you prefer to work with brand new characters or characters with some backstory? How was it to explore cannibalism? Did you read the comics or only the scripts?

Andrew J. West: It can be helpful, but also tricky to work from pre-existing source material. On one hand, you begin with a bunch of information that can help inform your decisions about how to approach the character. But you also have to be careful not to fall into the trap of trying to recreate a character that exists in a different medium. Chris is not the same as Gareth so I had to approach the character differently. But it was nice to be able to refer to the comic to get a general sense of tone for the story arc.

As an actor, you want to be able to explore the outer reaches of human behavior so it was exciting to explore something like cannibalism. Scary and intimidating but also exciting. But Gareth’s story arc isn’t so much about cannibalism as it is about survival. The thing to hook into was exploring to what lengths someone will go to survive. 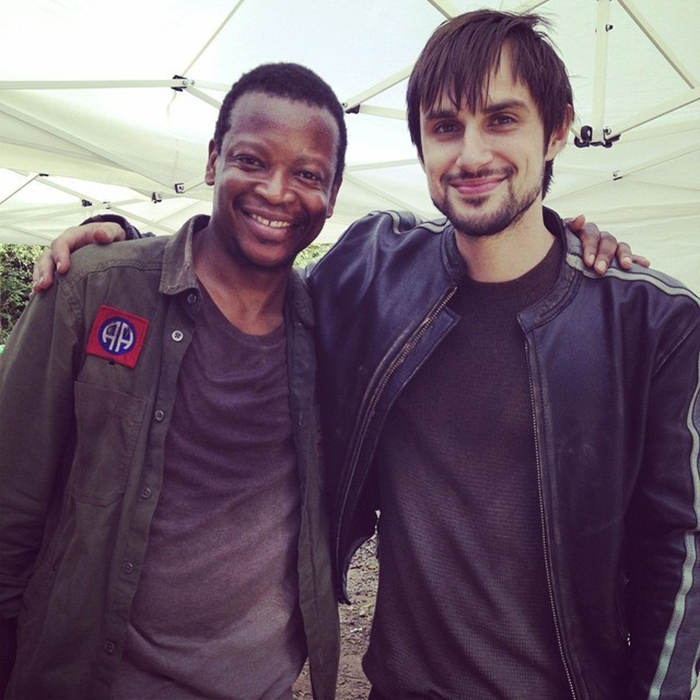 Being a leading resident of Terminus, your character had lots of scenes with Rick Grimes. How was it to work with Andrew Lincoln?

Andrew J. West: Andy Lincoln was truly one of the most gracious and committed actors I’ve ever worked with. He gave everything to his character and the scenes that he was in. It’s what you always hope for in a scene partner.

Andrew J. West: Episode 2 of season 5 was the most fun, just because the “Can’t Go Back, Bob” monologue was maybe the best written scene I’ve ever had the opportunity to perform. And it was just so shocking. I absolutely loved it.

The next episode, in which my character is killed, was the most challenging. Begging for your life in front of someone with a machete makes for a long night.

What would you say would be the ideal ending for The Walking Dead, if you could choose it?

Andrew J. West: That one’s easy – Gareth never died! We see our heroes vanquish the walkers and re-establish a functioning society, only to see a stitched up Gareth come shambling out of the shadows, ready to wreak havoc on them again. The unlikely return of Gareth, that would be my ideal ending.

Now let’s talk about Once Upon a Time! Your character is completely different from Gareth. How was it to transition from villain to good guy?

Andrew J. West: Oh yeah, that definitely required some recalibration. Those characters are total opposites. But the key is to never think about your character as a hero or a villain. You want to think about them as a person with specific goals. That simplifies the approach to any character no matter how moral or immoral their actions are. 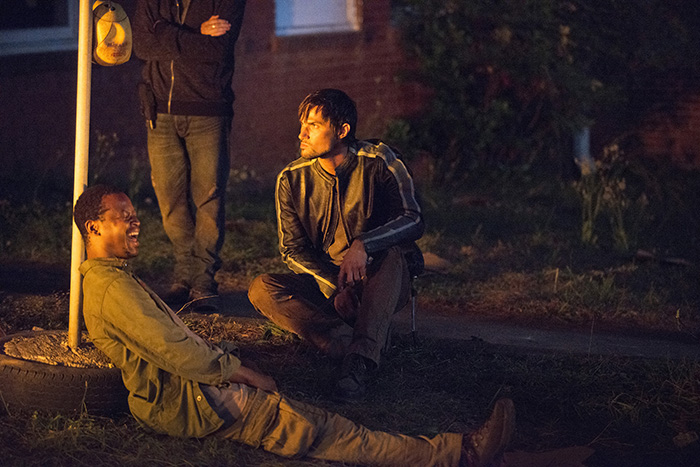 We heard that both casts, from The Walking Dead and Once Upon A Time, are like families. What can you say about how it feels to be on the set with both the casts? Do you still keep in touch with any of your co-stars from those two shows?

Andrew J. West: It’s very true for both shows. The casts were incredibly tight with one another. They weren’t just work associates, they would hang out at each other’s houses on the weekends and they were involved in each other’s lives. That goes for The Walking Dead and OUAT. I keep in touch with nearly all of my castmates from Once and I do get a chance to reconnect with some of my castmates from The Walking Dead from time to time too. Conventions are so great for that. They feel like reunions.

Andrew J. West: I was very lucky to have finished work on a film just about two weeks before we went into lockdown. So that project is being edited and will hopefully come out next year. Otherwise, I’ve just been trying to take advantage of this time by exploring some other interests that I don’t typically have time for and spending a lot of time with my family.